The percentage of athletes doing steroids in college is probably far, far lower than you might think, or at least lower than your average Jersey sports talk prole might think they are, since they and every conspiracy theorist on the planet assumes every athlete is on all of them and cannot be dissuaded from this opinion

Dey're all on it oh totally TOTALLY i mean COME ON like my cousin works in a gym and we were doing shrugs and I was like "right?" and he's like "Totally everyone I know does em and they're all freakin' cheats" and then we said Carlos Beltran needs to start taking the good ones because he's clearly skimping on em RIGHT FREAKIN' BELTRAN YOU PUSSY NEXT CALLAH--

Steroid use, like alcoholism, requires discipline if you're going to do them right, something seriously knocking out at least half of our sample group from consideration here. Take out those who can't afford the basic materials, and now we're looking a group halved again at the least. Assume half of this quarter wouldn't want to do them anyway, and we're now down to a solid 12.5% who would be a likely slice of willing Nandrolone-anauts.

That said, if you didn't suspect Brian Cushing of being in that fine slice of willing, able, and organized PED users in college, then you're Joaquin Phoenix Cleveland Steamer insane. 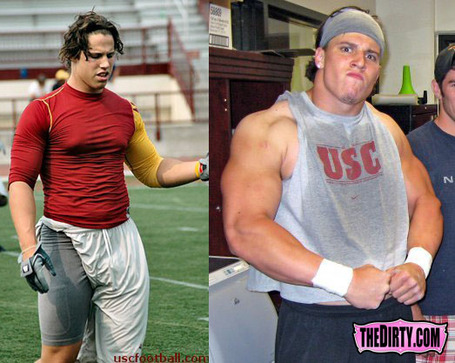 The general rule: if a guy looks superhumanly large, he probably is just that, and the results most likely come from steroids or other PEDs.

(Accepted as a counter before continuing: that some players are bell curve freaks, and are simply naturally huge. The best example we can think of is Allen Bailey of Miami, who looked like this in high school before he'd barely touched a proper strength program and instead got his workouts beating alligators to death with shovels on the Georgia Channel Islands.  Bailey's most likely one of those specimens, the sort we'd file under "country strong" whose genes spat him out on this earth in the mold of a He-Man figure.)

It's when the bodybuilder look begins to kick in along with sudden performance spikes that the eyebrows raise, which they will do even when you can't write about it. The weird contradiction at the heart of any steroid case is the diligence at the core of the infraction. Cheating, contrary to popular opinion, is hard work.  Steroid and PED users, on the whole, do not tend to be the lazy ones you might initially think would take a shortcut. If anything, Andro Cowboys tend to be the talented and hard-working willing to press every edge in order gain an advantage, even if it runs up against the ethical bounds of their chosen form of competition. Lazy, they're not; unethical, well...that's hard to defend. (Though category 5ers in the audience will and should certainly take a shot at it.)

If you'll excuse us, we have go take our "vitamins" for the gym.

NOTE: Edits were made after we were overly liberal with the term steroids, which should read PEDs, since the NFL doesn't release what performance enhancers turned up in the test. Four games during the season, though, doesn't seem like punishment for a diuretic.