THE FULMER CUP SEASON CLOSES, AND GEORGIA IS YOUR CHAMPION

Share All sharing options for: THE FULMER CUP SEASON CLOSES, AND GEORGIA IS YOUR CHAMPION

THE FULMER CUP IS, AS OF 1:34 P.M. SEPTEMBER 1ST, 2010, CLOSED FOR BUSINESS FOR THE 2010 SEASON. LET THIS ANNOUNCEMENT CEASE ALL SCORING. LET THE STANDINGS REMAIN AS THEY ARE. THE SEASON HAS ENDED AND THE SEASON HAS BEGUN ALLELUIA AMEN.

Your 2010 Fulmer Cup Champion is the University of Georgia. Congratulations on your titanic accomplishments in off-the-field festivities, sirs, and for bringing another championship trophy to the SEC. This was no one off lottery shot at the Cup title abetted by a few drunken citations. This represented a steady, workmanlike finishing of the drill by Georgia, who stumbled steadily toward the finish with the knowledge that in a town with bars as close together as Athens, the next drink was sure to bring adventure, possible minor legal repercussions, and ultimately Fulmer Cup victory.

We present you with your trophy in recognition of your work, Bulldogs, and wish you a happy 2010. These men bit into the the ripe fruit that is Athens, Georgia and sucked out every drop of nectar it had to offer, and they did it (mostly) without hurting anyone; they showed the way for the Fulmer Cup champions of 2010. So when the definitive chapter on Georgia's 2001-2010 decade is written many years hence, let it be said not only of the Class of '10 but of all these young men, these hard-drinking, public-urinating sons of America, that they were "just good ol' boys, never meanin' no harm. Beats all you ever saw, been in trouble with the law since they day they was born."

God bless you all, and God bless the University of Georgia.

Thank you, Doug, and congratulations to you and all other graduates of the University of Georgia.

The special subcategories are now awarded. ELLIS T. JONES III AWARD FOR INDIVIDUAL ACHIEVEMENT: Nigel Carr, the Florida State dynamo whose 13 point spree earns him the individual award for Fulmer Cup production. You're no Ellis T. Jones, but who besides the man himself is?

The Fulmer Cup is hereby closed for 2010. The final scoreboard is posted after the jump, and we congratulate Mizzou on their noble but ultimately futile rush towards second place at the end. As always, we invite you to thank Boardmaster Brian for his diligent maintenance of the Big Board, and for his continuing to grace us with his enormous, Reggie Nelson-sized penis. Additional thanks to the good people at SAS WIki for keeping the board updated, and to Holly for the illustrations and assistance. 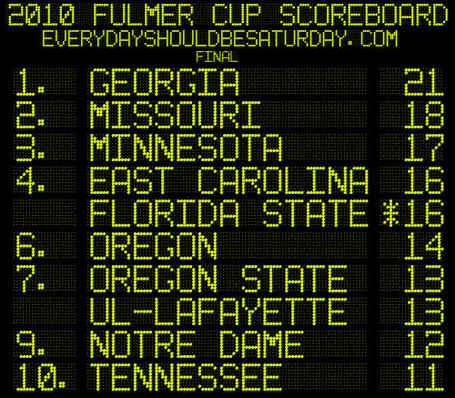