Welcome to Aggro-Tourism, EDSBS's roaming safari tour of all those foreign cultures that spring up on fall Saturdays, right here in America. First up: The Arkansas Razorbacks, to whose fans you should never, ever give your email address. Just trust us on this.

Arkansas is a nation divided when it comes to the gameday scene. With the lopsided division of home games between Fayetteville and Little Rock, two distinct fan subcultures have sprung up around the wildly disparate sites. This first weekend, the Hawgs play host to Tennessee Tech on their campus proper, a matchup bound to make the already-soporific scene in Fayetteville downright idyllic. Students are hardly visible outside the Greek compounds before about two hours to kickoff, and thus confine most of the property damage to their own property. The general air dovetails more with Arkansas' proximity to the midwest than its place in the South, and the action is confined more to parties on Dickson Street than widespread tailgating among the lay people. Don't make the mistake of letting your guard down and acting the fool, however. This is a fanbase that openly roasts copies of its own mascot on a spit for human consumption. They may not look it, but they're a hard people. 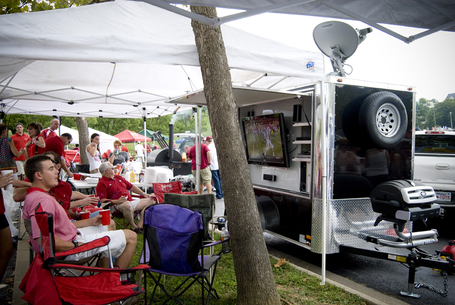 The unique thing about Arkansas is this is the Land of Walmart. Every company/brand that sells an item in Walmart is required to have an office here. With those companies comes their money (and their annoying midwest/eastern seaboard accents).  That money turns into sponsorship dollars for UofA and the Have’s. Coleman, Disney, Proctor & Gamble, etc., have their respective spots on campus come game day. I’m certain that these companies have corporate boxes/tailgates at stadiums across the country but those are usually pro events. This is little bitty Arkansas. Enrollment of 18k.

Because of the corporate tailgating experience in Fayetteville, liability comes into play with these brands/companies being tied to underage drinking, out of office misconduct, drunk driving and on and on. It’s big, expensive, controlled tailgating. As much as it can be. Eventually the alcohol wins.

If you really want to see some action, however, your best bet is to head to Little Rock for the LSU tilt on Nov. 27. Our trusty Arkansas correspondents explain:

Remember back when I said The Have’s reign in Fayetteville? Holy shit, not so in Little Rock. Tailgating takes place in approximately a 3x3 square mile radius. Every bumpkin from the far corners of the state comes to Little Rock because it’s in the middle of state. 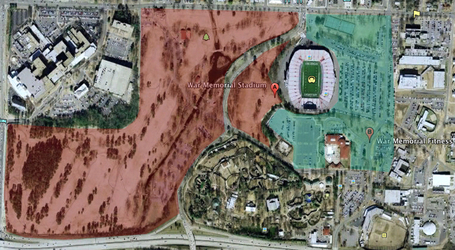 The red is A FUCKING 18 HOLE GOLF COURSE. I don’t know how they keep members after the partiers destroy this place but they do. (That grass is purty ain’t it?) There are 10x10 tents, pole to pole, lining this golf course, all 18 holes. With only enough room for walking up and down, once you’re parked in here, your in here come hell or high water. I say it’s bumpkins but it’s all types in this red area. Since it’s not university property, anything goes as long as it’s legal. And in some cases, illegal. Of course, it’s hard to spot incest without checking ID’s. The green area is where the Have’s play. This is still Old Money and your typical stuffy tailgaters. Back to the red area, you’ve never seen so many cops haul people off in your life. There are fights literally every time you turn around. A good portion of the people who tailgate in this area never make it to the game and some never had the intention of going (See also, The Grove). The inebriated wind up getting zip-tied, thrown in the back of a Ranger and hauled to a bus that will eventually run them "downtown."

Little Rock is the drunken, sloppy mess that SEC fans long for. Just replace a rowdy student section with a Rowdy Earl From Stuttgart section.  Pretty much everyone has their truck or RV parked on the golf course surrounding that 80 year old dump of a stadium (which I love dearly) and its just BBQ and beers the whole time. Little Rock is where the people from the more redneckish parts of the state (i.e. all areas that AREN'T Northwest Arkansas) come to get drunk and watch some football. The accents are deeper, the tobacco is dippin-er, and shit gets a whole lot trashier. It's Valhalla for hillfolk. There's a reason the 55K who cram into War Memorial sound way more intense than the 75K in Fayetteville - they ARE drunker and louder. I think Nutt started out like 19-1 in Little Rock games. I attribute that entirely to the drunkeness.

For sleeping: The Inn at the Mill in Johnson, or The Inn at Carnall Hall, right next to campus
For setup: In Fayetteville, around the baseball stadium or in the Gardens on Razorback Road.
For sustenance:
• Grub's Bar & Grille, 220 N West Ave.
• Hog Haus Brewing, 430 W. Dickson Street.
• The Catfish Hole, 4127  W. Wedington Dr.
• Oseguera's, 1100 48th Place in Springdale.

And just for funsies, here's a typical shopping list for what you'd need to truck in to compete with the Ozarks' finest:

Corporate tailgate setup:
40 suitcases of beer
At least 1 keg if you can hide it properly (UofA shut down kegs last season)
Pit Grill (trailer’d)
Enough meat to feed anywhere from 200-1500 people (depending on your location of traffic, time of game, and how friendly you get as the day goes on)
5-10 handles of brown water
Drinks for the kids
At least 1 flatscreen that fills up the back of your tahoe
Tailgating Trailer (there’s a company in Fayetteville making these custom trailers (pic attached) that have been popping up all over campus and now they sell them on Samsclub.com)
Table arrangement (flowers, candelabras, etc)
Tents either 4 tied together or one of those huge white Event Tents.

A typical setup for the Everyman in Little Rock:
3-6 cases of beer
1-2 handles of brown water
Grill or Pit Grill (The pit grills have grown to some kind of fucking competition. One showed up on 22’s last year. They’re actually gorgeous. I don’t know how people cook on them. I’d drive one of those fuckers.)
Drinks for the kids
Enough meat to feed anywhere from 10-200 people
Flatscreen TV/huge box TV
Sound System provided by factory truck system
And a couch. Out of every 10 couches/pieces of furniture brought to the golf course, 5 are left. Seriously. I don’t get it. Either something happened during the tailgating that resulted in ditching the couch or they lost  a member of their party and left it behind for him/her to sleep on till the course reopens on Sunday.

Many thanks to handsome, erudite readers Jerkwheat, Zac, and Merridee for massively entertaining interviews. Next week's subject: Iowa. Hawkeye bros, drop us a line at wolfbearclownshark-at-gmail if you'd like to contribute.