Share All sharing options for: THE BIG BOARD GETS A LONG DELAYED UPDATE (SPONSORED BY CROWN ROYAL)

The Big Board has been busy with the Big12pocalypse and the USC sanctions, and thus has severely neglected the Fulmer Cup, which we found waiting patiently by the food bowl despite not being fed for days. When we saw it, it even wagged its tail, poor thing.

As always, the Big Board is brought to you by Brian, who with Reggie Nelson invented the art of genital lassoing. Apologies, explanations, and equivocations follow. 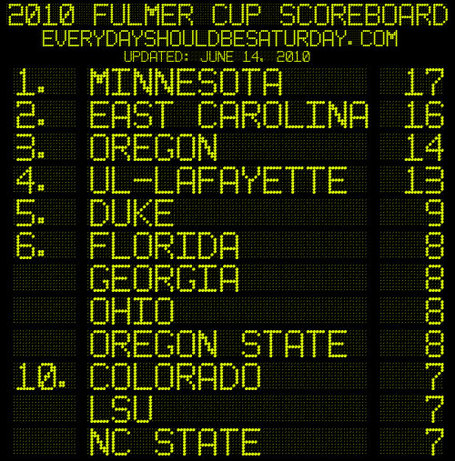 .TWO BOTTLES OF CROWN. There are two curses rampaging through college football right now: the Curse of the Mangino, the magical storm blowing its way through the Big 12 and what's left of Lew Perkins' career, and the Curse of Invisible Carlos Dunlap, the juju that sank Frankie Hammond's chances of ever cracking the starting three wideouts at Florida after he was arrested for DUI at 2:09 a.m. on the Florida campus.

It's difficult to overstate how stupid this is, since a loud fart can get you a noise complaint on what is an extremely policed campus.

The "uncoordinated" Hammond – with slurred speech, bloodshot and "glassy" eyes -- failed his sobriety field tests and registered breath samples of 0.188 and 0.191, according to the report. The legal limit for blood alcohol content is 0.08. Police found two open 750-ml bottles of Crown Royal whiskey in Hammond's tan Mercury, according to the report, one in the back seat and one in the trunk.

Invisible Carlos Dunlap, the least you could have done was take the wheel and leave the police baffled at how an empty car drove itself over a curb, opened its door, and then came to a halt. (We're not even mentioning the sight of a floating Crown Royal bottle tottering off into the woods.

Instead, Hammond--who at .18 was Nolte-level hammered--gets a big-boy DUI charge, a bonus point for the insane execution, and the required point for being a Florida homeboy for a total of five points in the Fulmer Cup. Hammond is the 8329th player arrested in the last week under Urban Meyer's management in Gainesville. Under the new, more cuddly Meyer, Thompson's issues will be solved internally with hugs, a burial on the depth chart, and potent one-on-one staring sessions with Meyer.

JEREMIAH MASOLI IS POLYNESIAN FOR RYAN PERRILLOUX: The former Heisman candidate and starting Ducks qb finishes his career with a traffic stop and suspended license combo and one point for Oregon's repeat performance, thus adding three points to the grand total of the 2010 Ducks Fulmer Cup effort. This only strengthens the theory that those who play qb for Chip Kelly develop a strong miscreant streak or have their knees explode, both fates better than being a quarterback named "Leaf," which is the third and most dire option.

BECAUSE THIS IS LIKE, FULMER CUP CLASSIC WEEK: Iowa and Florida both check in this week, with Iowa getting a two impressive points in a "massive barfight" that ended up with RB Jewel Hampton and DE Jordan Bernstine earning Punk in Drublics. Bernstine in particular should be familiar to any of you who have taken a young, Ferrari-esque liver out on the intoxication highway and discovered your driving skills were not up to driving such a fine machine:

Lt. Bill Campbell of the Iowa City police department said officers reported Hampton "was causing problems … had an odor of alcohol and had red, watery eyes...He repeatedly interjected himself into the arrest and escorting process of the officers arresting Mr. Hampton...He was a problem for officers....Officers reported (Bernstine) had bloodshot eyes, slurred speech and kept asking the same questions," Campbell said.

Oh, Granddad. We miss you so much sometimes.

A HUNDRED POUNDS LIGHTER ARE YOU CALLING ME FAT BY EXISTING? [PUNCH!] Clemson lineman Jamie Cumbie is gone. Like, catapult out of town gone. Read the following, and consider the three points for felony assault and one bonus for overkill to be gentle awards given the circumstances: t approximately 2 a.m. May 28, the Clemson Police Department received a report of a reported assault at the intersection of North Clemson and Hillcrest Avenue. According to the report, Cumbie assaulted the victim "by striking him in the face with his fists without his consent."

The victim, according to the report, was transported to Greenville Memorial Hospital for treatment of injuries including his nose broken in several places, six or seven facial fractures, numerous lacerations in the mouth, a hematoma of the right temple with swelling and bleeding of the brain, strained muscles in the neck and vertebra, two black eyes, a broken tooth, and two other teeth bent back into the gum. According to the report, Cumbie is six inches taller than the victim and outweighs him by 100 pounds. He stands 6-foot-7, 290 pounds.

Appropriate force met with appropriate force, there. Four points total for Clemson, and one instructive lesson for us all in the importance of carrying a canned ham to distract large, hungry men should they become angered in your presence.

HOW DO YOU SAY "I LOVE YOU?" BY PUNCHING A WINDOW. Tulsa gets three points for some real talk gone wrong, or as those who like clear speech say, "an idiot's approach to winning back a woman." You came back here, assaulted my boyfriend, and then punched out my window?

MAKING GIRLS BLEED IS NOT ONE OF THE THREE OPTIONS PAUL JOHNSON WAS TALKING ABOUT: GT DE Robert Hall gets two points for a misdemeanor charge and a "hitting girls" bonus for making his girlfriend's head bleed.

MISLEADING SCORE OF THE WEEK: For blowing a .10 and running over a curb or two Arkansas fullback Van Stumon gets four citations, and thus four points. Someone needs to buy Wii Sports for the FPD yesterday, because Fayetteville cops be bored, yo, though Razorbacks fans take solace in the increased point production across the board for the Hawgs.