SOMEONE NEEDED SOME MAIZE COLORED GRASS

Share All sharing options for: SOMEONE NEEDED SOME MAIZE COLORED GRASS 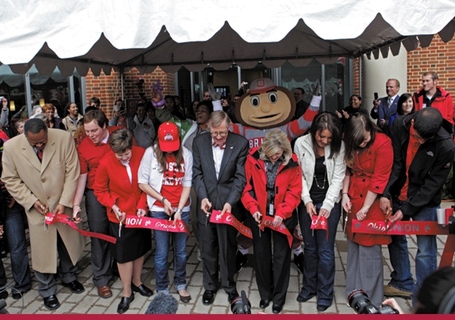 That is Brutus photobombing one of Ohio State's own ribbon cuttings. That may also be his alibi provided the photo was taken around the same time as the theft of some Maize-colored turf--a six inch by four foot piece of it, to be precise--was stolen from the Block M on the field at the Big House. Everyone else will follow this up by describing the Block M as "iconic." We prefer the term "bigass," and the AP Style Manual can suck it.

We are shocked, however that the Detroit Free-Press and Ann Arbor News did not write the incident up thusly:

Has it come to this?

Has the Michigan program lost its ability to defend their own turf?

And did Rich Rodriguez need some fescue?

That may be fine in hayseed West Virginia, but here in Ann Arbor there's a higher standard