We've never, in the course of many man-hours logged in bars, had to urinate in a bar. In the bathroom in a bar, yes. Errantly on the floors of that bathroom? Definitely. In the tub of ice keeping beer cold in a bar? Perhaps, though we would say that we only did it for our country, and not on a random dare with the payoff of a single basket of chicken fingers.*

Austin Box, Oklahoma junior linebacker, did see fit to pee in a bar, more specifically on the barstools of Skky Bar. Box started four games at middle linebacker in 2009, played in ten, and bears a striking resemblance to Unfrozen Caveman Lawyer. 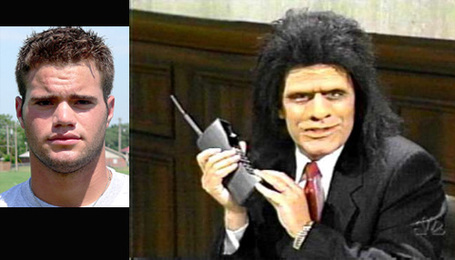 Box was told "he had to go" by bouncers at the club, the universal sign for "you are too hellaciously intoxicated to be dealt with, and are currently orbiting Venus." Box was then seen urinating on barstools near the entrance of Skky Bar at around 2 a.m. Saturday, arrested, and charged with a complaint of "outraging public decency." Oklahoma earns one point in the Fulmer Cup, while Christina Hendricks dodges all charges of outraging public decency by stunning all law enforcement officials within thirty yards with an ambient, impenetrable cloud of pure zafitg sex. (But she's guilty. So, so guilty.)

*The offer also included fries and one 12 oz beer, too.