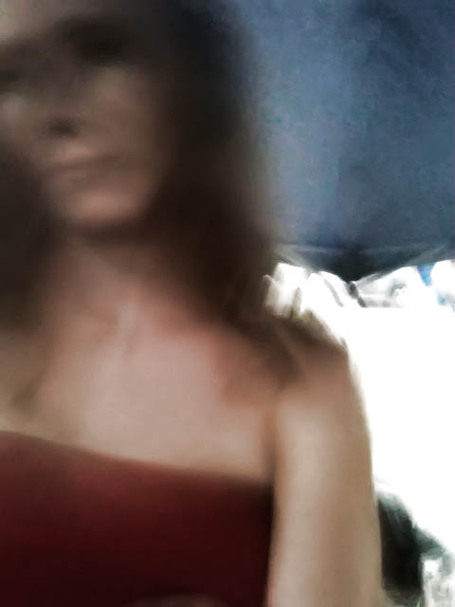 A favorite question of mine to ask people I'm getting to know is: "What individual, personal relationships and relatives excepted, do you wish were still alive?" The most common answers I receive are the ones you'd expect -- JFK, Dr. King, Elvis, Michael Jackson, Cobain, Phil Hartman etc.

That is because most people are not nerds. For my money, give me back Marshall McLuhan. The Canadian media theorist's ideas resonate so strongly with my observations of a world intertwined with communication technology that it blows one's mind to realize he didn't even live to see Ronald Reagan's inauguration.

And thus we are deprived learning of how Professor McLuhan would consider a device such as the iPhone. Far from me or anyone else to project where the academically-mercurial McLuhan would stand on an object at any given time, we can reliably stick to the understanding that McLuhan quite rightly believed in Technological Determinism -- the idea that art and communication are molded after the devices we invent to facilitate, enhance, or amplify them.

Thus in considering the iPhone, we look first at its heritage as an iDevice to which McLuhan would point to how recording technology has adapted to the first trend in the age of mechanical reproduction that degrades, rather than enhances, the quality of the reproduction (fuck you, mp3). In other words, music is no longer produced to sound good on a great stereo, but to sound good after the lossy compression used by the mp3 and AAC formats. (Previously exploited by one Phil Spector.) The idea of what past elements are recalled by the new technology was of great interest, too, to McLuhan. After decades of the album's domination of music commerce, the iDevice has returned us to a music culture centered around the single.

Yet it is the iPhone's (or other smartphone's for that matter) innate ability to facilitate immediate communication, and thus transcription, of events in the moment that bring it to the focus of our discussion. The evolution of our culture from oral to literate to electronic to hypermedia has brought with it a diminished role of memory as we reach each stage. As long as we have tweets or text messages or pictures or video of what we've done, we can function pretty competently even if we're suffering from anterograde amnesia like Leonard Shelby. His memories were written on his body (in the literal sense) and stored inside Polaroid pictures. Ours are carried to parts unknown by the bits and bytes of AT&T's network.

Or they would be, if I had any signal. Which is where we start our story.

I left the house at 11:30 wearing my Ed Hochuli costume, sans the 14 layers of shirts I normally wear underneath it because dammit it's too hot. But resplendent in white cap, zebra shirt, whistle, white baseball pants, black socks and Adidas Telstars -- with a flag I sewed using the sleeve of my work shirt from Hawks Pizza in Napoleon OH and using a string of old Gasparilla beads as ballast -- I boarded the CT1 bus to head downtown and, catching a shuttle, to the Gator Bowl. There was no way in hell I was going to drive, and I planned to be back home before the late games started anyway. I had no game ticket, but cash enough to buy one was shoved down one of my socks.

The other riders are the usual busriders except for two guys clearly headed to the game, one in a Broncos Tebow jersey and the other sporting a very classy "MY COCK + YOUR PUSSY = GOOD TIMES" t-shirt. I decide then that they will be my friends for the day. As it turns out, they are fellow Ohioans, one of whom recently moved to Jacksonville and the other visiting on vacation.

Thus began a good 45 minutes of this gentleman wandering into Georgia sorority tailgates and sticking his stunt cock into anyone's face, food, ass that he could. This would allow me the opportunity to blow my whistle and throw a flag for illegal use of the hands, etc. It did not go over particularly well, and we concluded Florida fans would appreciate this humor much better. We crossed the street to head to the eastside parking lot when a sheriff's deputy stopped Mr. COCK.

"You can't go over there with that shirt on. There's kids there."

Now, my new friend had two options. Keep walking and ignore the cop who was directing traffic and most certainly would not chase him, or argue. He chose the latter. Which is how I found myself citing Cohen v. California (1971) to a Jacksonville cop while wearing a full referee's outfit and eye black.

"This ain't California, buddy" was the reply from the cop, and before I could explain how Supreme Court jurisdiction works he told me my pants were too tight. This went on for at least 20 minutes as I quoted Justice Harlan and was threatened with arrest. Eventually Mr. COCK was forced to surrender his shirt, wig, and fake penis. (Somehow he later re-acquired them.)

So the drinking started, the first of the five girls on the day who would grab my junk grabbed my junk, and we bought tickets for face on the sidewalk by Gate 3.  Two heavily-inked girls dressed as cheerleaders demanded my picture (that was happening a lot too) and I bartered my way to a wristband for their rather expansive tailgate for the opportunity. I'd have hung out with them more except I was afraid of catching Hepatitis. The 1:30 scheduled live show on JTV I'd promised never happened because there was no signal, or at least no data, anywhere. No texts, no tweets, no live video, no live pictures, sorry kids. 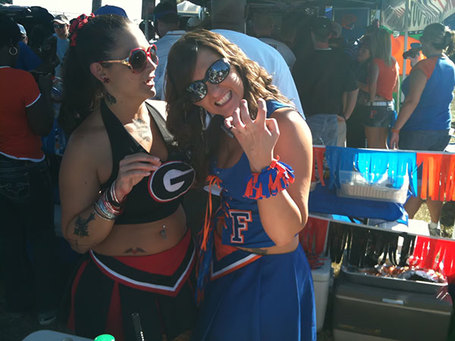 We call the game cups. You probably call it flipcup, or flippy cup (ugh) but you probably call Beirut "beer pong" too. It's by far my best game, and by that I mean I am below replacement level in anything else that involves drinking and competition. But at cups, I'm a superstar. And we're holding down the table ten minutes, a half hour, and now it's 3:30 and I am far from considering that the game is starting. Mr. COCK and Tebow are long gone, which sucks because I could have made a new friend from my neighborhood.

I don't know when I got home. It was dark out, and had been dark for a while. I spent almost all that time with a girl whose name I do not remember, and whose Georgia affiliation I know only because of the single, blurry photo I have of her that is featured at the top of this post. I know a lot of laying in the grass was involved because my baseball pants are filthy. I know at least 75% of that time was spent making out because, well, those are the parts written with Sharpie on a day when everything else is scribbled with a Pilot V7 empty of ink. I know my penalty flag fell apart because there's a picture of me wearing the Gasparilla beads. I know I was on a Georgia sorority bus at one point. I know how I got home, in a minivan full of people that was being driven by -- wait for it -- this young lady's father. Whether or not he knew I had been cavorting all day with his daughter is a mystery but that I remember how I got home is a miracle enough. I received no phone calls, nor texts, nor are there any new numbers in my phone. I only know I really, really had a happy day.

I left a four-minute voicemail with my ex at 4:07 pm but have no idea what I said.

I did not learn the final score of the game or even who won until Sunday morning.

McLuhan teaches us that when technology is pushed too far it reverses. My usual MO of documenting my activities through Twitter and text was reversed to the most basic oral history when, well, too many people were using their iPhones at once. Stripped of auxiliary memory tools, we have only grey matter, and when grey matter malfunctions due to rumrunners and Budweiser, it is a failure on all fronts.

Too, new communication technology always pushes forward while recalling something from the past. These experiences, and really I apologize for playing it up and writing so much bullshit when the story itself wasn't that interesting. It seems unique, new, but it recalls similar episodes, almost always external to a major sporting event, with almost identical outcomes. Is the story better or worse that way? I once lost my father's green corduroy sportcoat, with the classic professor suede elbow patches, after a USF game in a story that was mentioned during the AGGRO-TOURISM feature a few weeks ago. I loved that jacket, because a) it was awesome and b) it carried with it a lot of memories and history but in the weeks and months that passed I realized that jacket was more valuable in its absence because its absence told the story -- and no loss is greater than what is gained from having a story to tell.

And thus we have a picture, as blurry as the memories of the circumstances that led to its taking, and really you could have saved yourself a lot of time by looking at the picture and making up your own story.