[A courtroom, veiled in shadow and filled with the whispers of tense spectators. The BAILIFF enters silently through a side door, and a hush falls over the room.]

BAILIFF: Hear ye, hear ye! Now before the court: the matter of the People of Notre Dame versus Brian Kelly. All rise for the honorable Judge Baghead.

[Torches at the front of the courtroom flare to life. BAGHEAD THE ADJUDICATOR sits atop a tennis umpire's chair.] 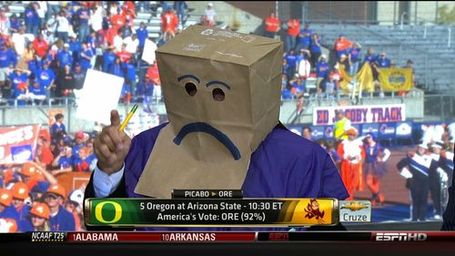 BAGHEAD: Today we purport to do justice, but what is justice in a universe of infinite pain and sorrow? Justice is vengeance, for in the final darkness that shall envelop everything there is no difference between the two, like unto the smoking hot one and the grenade. Bring forth the accused!

[The main doors of the courtroom swing open. A disheveled and gaunt BRIAN KELLY walks toward the bench. His Adidas visor is frayed and sits askew atop his head.]

BAGHEAD: Coach Kelly, your crimes are many and your defenses few. You are charged with throwing a home game against a Conference USA team, mortally endangering bowl eligibility, destroying your quarterback's confidence, and setting the season on an unending spiral of despair. How do you plead? 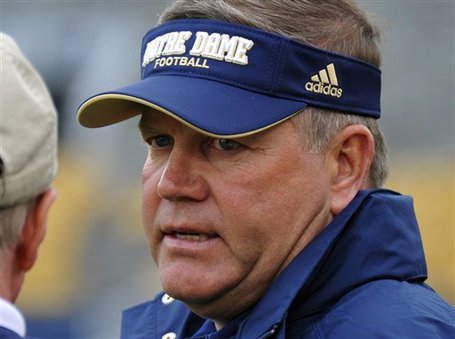 KELLY: Wait, what? How did I get here? I just went to sleep the night after the Tulsa game, and now--

BAGHEAD: Do you not understand, Coach Kelly? You have pledged your soul to Notre Dame, and now the remainder of your days shall be a waking nightmare. After every season-destroying loss, you will be called before this tribunal as punishment for your sins.

[The PROSECUTOR emerges from the shadows.] 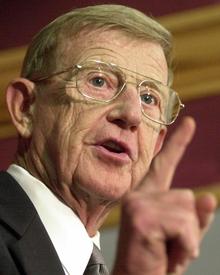 [FOOTBAW BOB steps into the witness stand, his shirt awkwardly buttoned all the way to the top.]

PROSECUTOR: Footbaw Bob, had you been in the defendant'sh posishon, would you have kicked a field goal at the end of the Tulscha game? 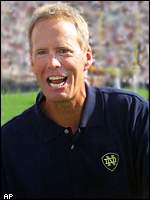 FOOTBAW BOB: Well I'll tell ya I think in that situation you have to punt the footbaw to give your defensive footbaw guys a chance to win the footbaw game.

PROSECUTOR: Your Honor, I shubmit to the court that even if Footbaw Bob had punted at the end of the game, the ball would have gone through the uprightsh and had the shame effect ash a field goal.

BAGHEAD: Who is to say, Counselor Holtz? Is not Footbaw Bob capable of staggering incompetence as the clock ticks to zero? Even so, I sense that even his sun-addled brain would kick the ball, if for no other reason than to avoid scoring a touchdown. Your argument stands.

PROSECUTOR: Thank you, Your Honor. In that cashe, the proschecushun callsh ash it'sh next witnessch Tyrone Willingham, the Void of Charisma.

[No response. Awkward silence in the courtroom.]

PROSECUTOR: Um...jusht a moment, Your Honor.

[The PROSECUTOR strides quickly out of the courtroom.  After a few minutes, he returns, dragging WILLINGHAM behind him. WILLINGHAM holds a scorecard and a golf pencil, busily totaling up his last round.]

PROSECUTOR: Willingham the Useless, had you been in the defendant'sh posishon, would you have kicked a field goal at the end of the Tulscha game? 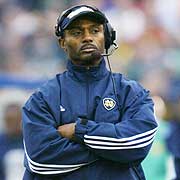 PROSECUTOR: Shall I repeat the queshtion?

PROSECUTOR: Do you understand the queshtion? 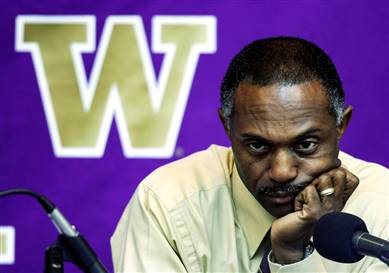 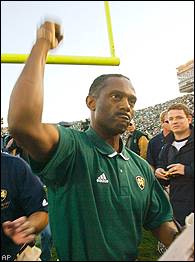 PROSECUTOR: Your Honor, if it pleashe the court, I ashk that Willingham the Not-So-Really-Wronged's geshture be interpreted ash schaying he would have kicked the field goal.

BAGHEAD: Stoic is but a euphemism for feckless, Counselor. Yet we are aware that a field goal would leave a few more seconds for golf than a touchdown attempt, so we will allow your argument to stand. Let the record show that Willingham the Passive-Aggressive would have kicked the field goal. The witness may step down.

[CHARLES approaches the stand, talking on his cell phone to TAWMY FACKING BRADY.] 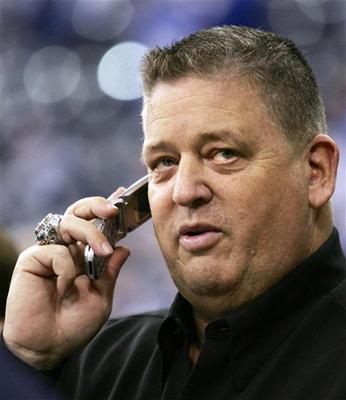 PROSECUTOR: Charles the Solidly Mediocre, had you been in the defendant'sh posishon, would you have kicked a field goal at the end of the Tulscha game? 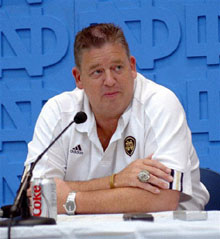 CHARLES: Well, the answer to that is really multifaceted. Tulsa was showing a soft Cover-2 shell, and we were using our Lake Titicaca package to try to create a mismatch on the Will, so alls I'm saying is--

CHARLES: Well, Dayne had a knee, but we were keeping an eye on him. I was just talking to Tawmy, and he said that he thought the Mike was stunting on that play, but I'll have to look at the video.

PROSECUTOR: Your Honor, I ashk that the court interpret Charles's shtatement as showing that he would have kicked the field goal.

BAGHEAD: The verbose merely seek to mask their own desperation, Counselor, and the video is only an everlasting record of one's failure. We know that Charles eschewed the field goal in a past life, and so we are tempted to condemn him and his testimony, yet no one can make sense of his meaningless jargon. Therefore we direct an inference in your favor.

PROSECUTOR: Thank you, Your Honor. In that cashe, the proschecushun reshts.

BAGHEAD: Coach Kelly, you may speak if you like, but know this: All your words in this life are transitory, and are but vibrations in the air as soon as they pass your lips. Have you anything to say before we pronounce our judgment? 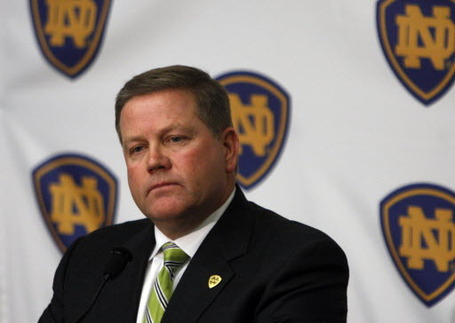 KELLY: Look, I don't know what's going on here. Do you have any idea how awful this team is? All of my offensive first-stringers' knees fucking exploded! For Christ's sake, does anything ever go right at this school? Does anyone ever catch a fucking break? I mean you can fire me if you want, fuck it, you can even hire Nick Fucking Saban, but as soon as he gets here he's going to have a frontal lobotomy, forget how to coach, and get blown out at home by Wake Forest.

BAGHEAD: We are conflicted, Coach Kelly. What you say is true, insomuch as that which you call truth has any meaning, which is does not. Yet you also display no understanding of your position and the gravity of the situation which is yours to suffer through. Perhaps it would be best to send you back to Cincinnati, where you may ponder the maddening question of how that which is not chili can yet be called chili. 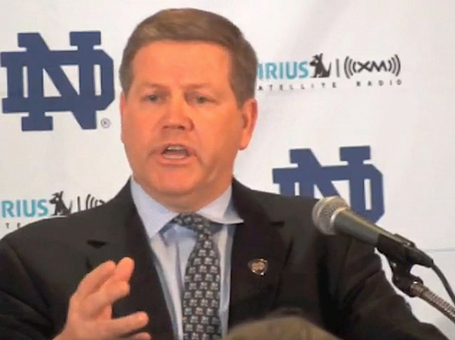 KELLY: Oh, fuck that. Have you ever been to Cincinnati? South Bend is like Paris compared to that shithole. Look, I have a lot of work to do this week, and I really need to get out of here.

BAGHEAD: Silence! We have come to a decision. Your failure is great, Coach Kelly, and your punishment must be harsh indeed. Thus we order the following: You shall survive this season, but after that you shall descend into an unending purgatory of Champs Sports and Pinstripe Bowls. Seasons not bad enough to end your misery, yet not good enough to make anyone happy. Injuries shall plague you, and at crucial moments all that you know shall be ripped from your brain, so as to ensure the worst possible outcome. Eventually you shall tire of this Sisyphean existence, and you will be sent to your deserved reward.

KELLY: And that would be what?

BAGHEAD: We warn you, Coach Kelly, we speak of the unthinkable horror. Behold your destiny! 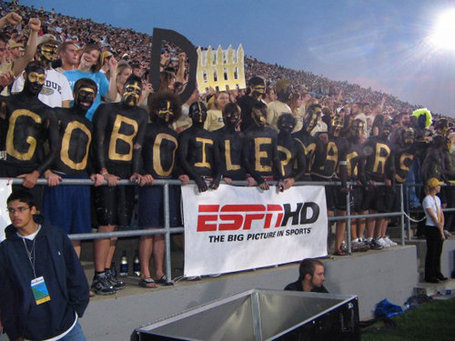 KELLY: Oh Jesus Christ, no! What did I do to deserve that!? Oh, please no! I swear I'll kick field goals all the time from now on! I'll run the ball more! I promise! I'll fire Diaco and hire someone who's seen the triple option before; I'll do anything! Anything but that! 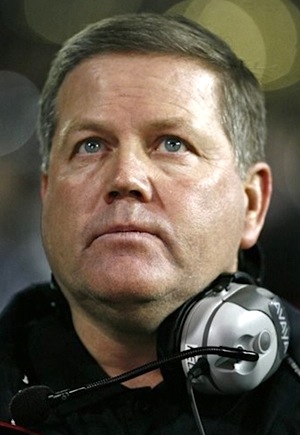 BAGHEAD: So it is ordered, so let it be done. This court is adjourned. We shall see you again after the Army game.

[The torches are extinguished, and the courtroom is plunged into darkness. KELLY sits and weeps softly, alone.]