Share All sharing options for: DR. LOU: FRAME BY FRAME

Dr. Lou needs the kind of deep, piercing analysis only EDSBS can provide. Watch last night's here, and then join the breakdown below.

Thank you, homely black girl, for your football question. 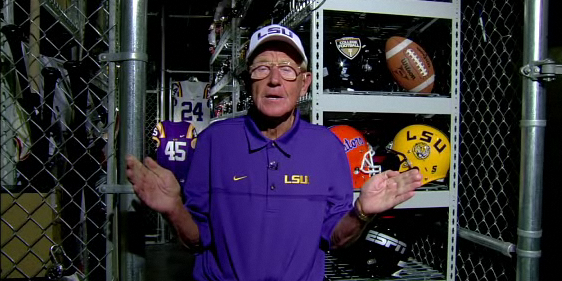 Men! Lou Holtz, in case you have not noticed, has tremendous hands, albino tarantulas that flap at the end of his wrists like meaty windmills during the dialogue. Here is he stating that LSU has won "two national titles in the past ten years." Lou Holtz, in addition to being ape-handed, is also bad at fractions. 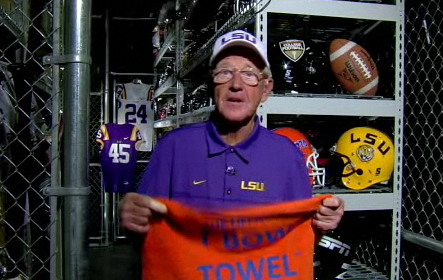 Lou Holtz also insisted last night the Tim Tebow Towel is too small to properly shower with, a matter of personal opinion, since Dr. Lou likes to really luxuriate in his baths and then emerge, pink and pruny like a great, giant-handed infant, into the warm embrace of a fluffy bathrobe and towel whipped around his head lady-style. Actually, we're imagining this right now, and he looks like our grandmother did padding around the kitchen in the morning. She's dead now, but unlike Lou, she did not rely on steady injections of fetal bone marrow for survival. 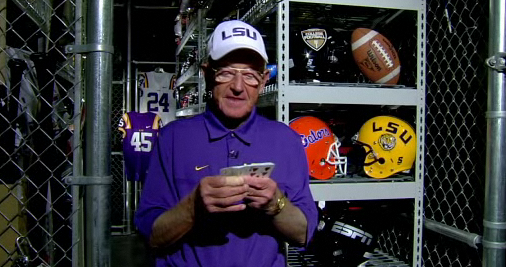 Lou Holtz carries around a deck of cards. Of course he does. First, he does the whole deck as pushups depending on the card like the guys in Generation Kill. Keeps the manboobs perky and the ladies sweating. Second, he likes to hook rubes in backalley games of three-card-monte. You're laughing until you saw the safe house it bought for him in Guadalajara, so don't snicker, sonny boy. Third, he keeps the ace of spades for himself, because if you like to gamble, we tell you Lou's your man, you win some, lose some, it's all the same to him. 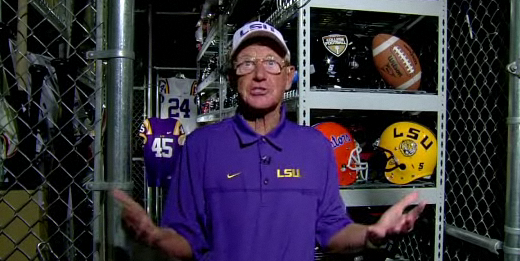 AND NOW CARDS RAIN FROM THE SKY. Thanks, dick. Someone's got to pick those up now. Also, it's a great idea to remind players just how badly a team beat you last year just prior to walking out. These men played you last year like grown professionals cockslapping a team of Pop Warner brats who just ran out of juiceboxes. In most states it would have qualified as a sex crime and an assault, but in Florida that's considered foreplay. I'm sure that will change tomorrow. LET'S GO. 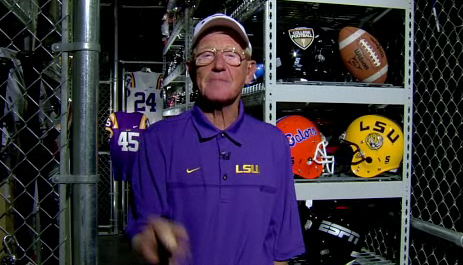 Sometimes it takes years to realize someone's insanity. You know someone for years, interacting with them on a daily basis for months on end, and never suspect it until one day a third party says "You know she's never forgiven you for not writing a thank you card." And you think, "Really? For a Starbucks' gift card for my birthday? The spoken thank you wasn't enough?" Then, from that point on, you move around them like they're seconds from stabbing you with the nearest sharpest implement, because their inner crazy has been unveiled in all its glory for you to see, and you can never sit in peace with them for longer than a careless instant ever again.

Some people hide it for years. Lou Holtz, unleashed in front of a camera in a hypothetical dramatic roleplaying situation, takes about 16 seconds to unveil his. In that sense he may be the most honest man on television. He can't even hide the hideous bandaid he has on his gigantic index finger, the one he waggles at the camera when he really wants to make a point. The three gestures Lou Holtz relies on:

3. Arms Spread Wide for emphasis (aka the Fuck You I'm An Anteater Pose.)

Holtz finishes the segment by flubbing Les Miles' "Have a Great Day" motto from his 2007 SEC Championship presser by saying "Have a nice day," which only accentuates the loopy, insane charm of a Lou Holtz pep talk. He had to screw that up, almost as surely as he cut the tip of his index finger on a meat-cutter in his weekday job at a Deli Counter Worker at Kroger. You never know where your next meal is coming from, and that something Lou learned the hard way during the Boxer Rebellion. "Oh, those Koreans. Such passionate, easily riled people!"