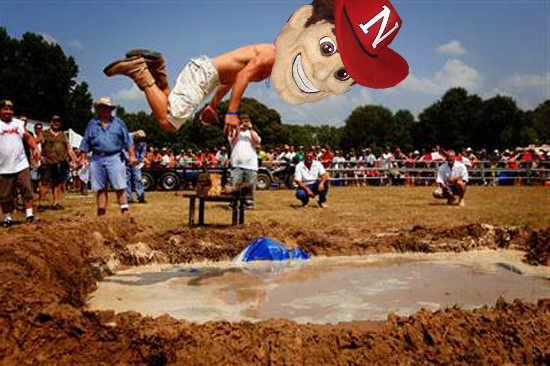 Nebraska offers little data to speak of in the direction of solid numbers thanks to games against Arkansas State, Florida Atlantic, University of Louisiana-Lafayette, and one sluggo matchup versus Virginia Tech. The matchup against Virginia Tech exposed Nebraska as being subject to random passes from scrambling quarterbacks somehow finding scrambling receivers in the endzone, a weakness shared by every other team in Division One football. The other salient factoid from their only matchup against a quality team: Nebraska did manage to rush the ball successfully against the Hokies, going over 200 yards on the day. Mizzou has been decent against the run, but Nebraska looks more like the mudder here, even with Tigers LB Sean Weatherspoon cracking heads and singing sweet melodies from his linebacker spot.

The Mizzou stat of interest is the young Blaine Gabbert's exceptional INT total to this point: zero in four starts, something he could continue tonight versus a Nebraska defense that bends, but does not break. The Huskers have allowed only 3 TDs in the redzone, meaning you could see some very soggy field goals from Mizzou tonight.

Advantage: Nebraska. When you're muddin', take the biggest truck you can find. That would be Roy Helu, Jr of Nebraska.

Category Two: Mascot: Nebraska relies formally on Herbie Husker, a jut jawed farmboy who looks like Terri Hatcher after a robust sex change operation and extensive hormone therapy. He has large feminized eyes, the kind of chin one can only get via a genetic condition, and large, feminine eyes you can stare into for days. If he succeeds in his plan to kidnap you and keep you in his crawlspace. 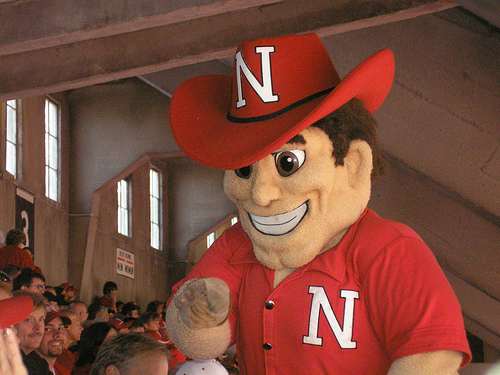 Can you help me carry these books to my Volkswagen over there? I hurt my arm...

The other Nebraska mascot is Lil' Red, a horrid vision from the deepest reaches of hell. If you animated the Ugly Kid Joe logo, then killed him and allowed him to reanimate and walk the earth as a vengeful wraith herking and jerking towards his bloody destiny, that is what Lil Red would look like. We are 33 years old and would run screaming from him if he confronted us. Stabbing him only makes him stronger.

Truman the Tiger is an inoffensive Garfield caricature modified to avoid copyright violations. Since he does not remind us of hellspawn, he wins by default.

Category Three: Aura. Mizzou has been a terrible place for Nebraska in the post-Osbourne Juggernaut era, with Nebraska losing four straight there after years of rolling in, setting fire to every living thing, and then politely urinating on the ashes before leaving. There is a rivalry here, and one swaying psychologically towards Missouri even with a freshman quarterback and a driving rain forecast. Missouri is also not the team coming off a nut-crushing loss to Virginia Tech and playing in front of a lively and likely rain-soaked crowd in Missouri. We know how we'd stay warm in 45 degrees and pouring, and it would be by just that: pouring, and covering ourselves in a raincoat made of false, boozy warmth. That also tends to make for loud stadiums.

Missouri: Charles Brockway (Sounds like the star of a forgotten B movie like "Preacher with a Shovel"), Forrest Shock.

Advantage: Nebraska, thanks to Suh.

Grudges? Scores to settle? Sheer cussedness? Advantage, Nebraska all the way thanks to the four game streak and Bo Pelini doing things like delaying the blackshirts until the defense earns them. If anything gouges Nebraska as much as their abysmal results against ranked competition, it is losing to teams they used to annihilate like the Tigers.

EDSBS FACTOR FIVE FIVE FACTOR PREVIEW SUM: 3-2, NEBRASKA You've Been Factor'd! This should mean to bet the other way given the dismal track record of the Factor Five Five Factor Preview to predict anything at all in any way whatsoever in the past, but at 3-2 right now, the Factor Five is not even an aid in predicting who won't win. As always, we're here to help, just like Herbie Husker, who no, why would you suggest he has a crowbar in his hand, little lady?