Methods: proposed techniques for protecting Tim Tebow if/when he plays on Saturday. Assumed: that he will play on Saturday.

Run, run, run, run, run. Florida might go even more run-forward than they've been to this point, and that says a lot. Florida's run/pass balance is 175/98 for 2009, and with a quarterback coming off a head injury the urge to get the ball out of Tebow's hands and into someone else's with great speed will be imperative. One might even see the long-rumored I-formation surface from the playbook at last. (Gasp!) 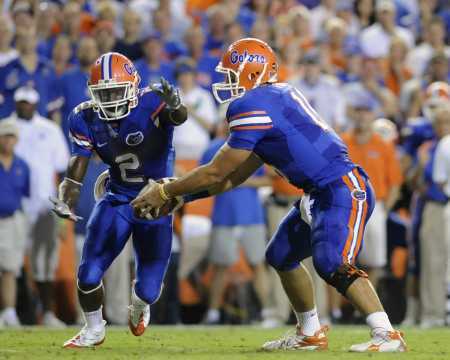 Le WildGatorCatHogRebelBone Florida has no shortage of speedsters to plug into the various roles required to run whatever you would call Florida's variation on the Wildcat: CB Joe Haden, RB Chris Rainey, RB/Human Jet Jeff Demps, RB Emmanuel Moody, and even WR Deonte Thompson could all fill spots in a direct snap, no-pass single wing formation to take impact-heavy run snaps away from Tim Tebow and lean on Florida's formidable run game.

An innovative nine lineman set. Leaving one eligible receiver in the set and thus protecting Tebow while simplifying his options. Technically legal, though inadvisable unless that one receiver is Aaron Hernandez. If he's out there you'll be fine with just one if you throw it high and long enough.

Max protection. Typically Florida loves to go empty set on third down, the same set resulting in the blown protection yielding the sack, the subsequent knee-->head meetup, and the most Illustrious Heismanesque Concussion of the Year not involving Jim Brown and a woman. If Tebow is in the game, your chances of seeing max protection are very, very good, most likely using the H-back and TE to buffer protections on blitzes. And make no mistake: LSU will blitz Tebow if he plays. The empty backfield won't appear in sets with Tebow much, we're guessing, and if they do they'll be motioned into one-back sets

Red No-Contact Jersey. There would be an illegal procedure penalty on the first down of the game, but conditioning is a hard thing to break. Urban myth: red angers defensive linemen. Untrue, since the waving and taunting motions of the quarterback are what actually attract them, not the color.

Pass, pass, pass, pass, pass. On the other hand, another way to protect Tebow might be counter-intuitive: passing like crazy to start. If you can go Texas Tech on LSU--who most likely expects the run-first strategy from Florida--you can get the ball out of Tebow's hands and away before any harm befalls him. Until Taylor Potts' concussion last week, Texas Tech's qbs under Leach had avoided missing any real injury time at all thanks to schemes designed to read and react instantly to defenses. Scott Loeffler certainly has a few routes he can crib from the TT playbook in keeping Tebow squeaky clean and intact if he plays, routes designed to get the ball out, keep the Baby Rhino upright, and keep Florida's offense humming away one humble nibble at a time against an exploitable LSU defense. (See: Mississippi State's 374 yards against them.)

This is all dependent on Tebow getting the ball off quickly....one of the factors contributing to this situation to begin with along with a blown protection, a very random collision with a teammate, and an excellent play by a Kentucky defender. If he can't make the read quickly and get the ball out, then the pass-first approach would really be the total madness skeptics accuse Mike Leach's very sane logic of being.

Bubble-wrap. It would distract defenders, too, and leave them manically popping bubbles while ballcarriers run untackled up field.