TRUTHS THAT ARE ONLY APPLICABLE IN WEEK FOUR OF THE SEASON

Share All sharing options for: TRUTHS THAT ARE ONLY APPLICABLE IN WEEK FOUR OF THE SEASON

A list of extremely premature assumptions one can only make in week four of the season. Ride a non-existent wave early and often: 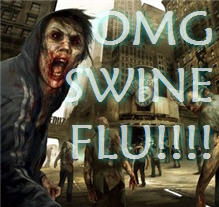 It's real, and though we would not wish swine flu on anyone, if a non-fatal but debilitating case has to hit someone, let it be Lane Kiffin for irony's sake. Ole Miss had 30 players out with it against Memphis, and it is an open question as to what kind of an effect it will have on disrupting the early rhythm of a team picked to rip through the SEC West this year. (Your test of their giggity tank levels: tomorrow night at South Carolina.) Florida had key players sick (see: Kiffykins' comments), and it won't be the last time a team has a major game at least influenced by the flu.

2. Pete Carroll is in decline. Meme strength, 5/10 Rightly upbraided for dropping what everyone knows USC will drop--one in-conference game to a patently lesser opponent--the overreaction is now all but complete, especially now that Gregg Doyel has filed the column "Jim Tressel is a better coach than Pete Caroll DURRRR" piece.

(Doyel is the canary in a coalmine, meme-wise; when he uses a joke or shows up in certain item of clothing, you should run the other way at a deadsprint.)

Longevity prospects: Minimal. USC will struggle this year, a term for them meaning two, perhaps three losses. They are also starting a freshman quarterback and are beginning to ride the low end of a nasty injury trend, espcially with Taylor Mays looking doubtful for this week. Pete Carroll still loves you and forgives you, angels, even if this year will be slightly less perfect at USC than usual.

3. Tim Tebow is down. Meme strength: Variable. One mediocre game at Tennessee and suddenly he's ritually unclean. The strength of the idea varies depending how close you are to Florida, with strength increasing in direct proximity to Athens, Knoxville, and Tuscaloosa. He's healthy, fine, and made errors in a game where he otherwise came in just a bit below his numbers from the previous year's games. He is ranked 91st in the nation in passing right now, true. Cody Hawkins is tenth. Go ahead and feel free to switch them out if you like. Please, be our guest. We're waiting.

/whistles, reminds self of small sample sizes and their distortions.

/suggests you stay at blackjack table another hour and see how it goes!

4. Da U is Back, Baby! Meme Strength: 9/10. The raging current of the moment. Let's look around the ACC to see if this is...yes, this is completely true. The only serious challenge for them in conference remaining will be a.) Virginia Tech, a defense capable of dragging anyone into the kind of slugfest the Hokies thrive on, and b.) the one game Miami just decides to not show up and play because they get overconfident, lazy, and high off their own glorified flatulence as young athletes tend to do.

Otherwise, no homerish hatred here. They are the realest bitches alive like Marques Slocum's mother, and if Jacory Harris is playing behind that line, they stand a chance in every game they play, including the Oklahoma game, though Bob Stoops could do what, say, Georgia Tech refused to do: make Harris' reads difficult and pressure him with a four-man rush. Depends on which Oklahoma decides to show up: BCS Oklahoma, or everyday boundlessly talented and focused everyday OU. If there are ACC refs, anything could happen besides the game going quickly, efficiently, or without inexplicably blown calls.