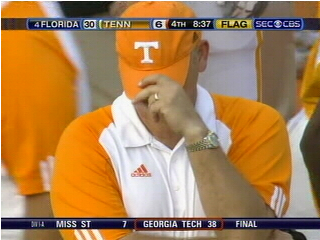 Orson: I was going to open by suggesting that I will wrap you in a giant sheet of latex, and then tell Tim Tebow you were an enormous penis in need of circumcision.

Holly: Tebow heard that. And he's very disappointed. Not as disappointed as he's gonna be on Saturday, but sad.

Orson: When your opponent lays down in the second quarter of a rivalry game for years at a time, it does disappoint.

Holly: Which is, in turn, not as sad as you will be when I link your 401K to Bobby Bowden's retirement, and bring back David Cutcliffe to rain down fire and brimstone and perfectly executed indefensible slant passes.

Orson: Funny you should mention that. I just made a killing off selling Lane Kiffin a bridge I do not own. It has a hole in the railing where Johnny Majors drunkenly plunged off it in a Chrysler Cordoba, but he said that was fine, he'd take it as is. Also, if Cutcliffe came back, we'd just hire Richmond's defensive coordinator. They did a fine job with him last week.

Holly: Speaking of Johnny, he should be turning up on your doorstep at any moment. You've been named his sponsor. He'll be the one rolling up to the door in a barrel.

Orson: I have appointed you as Rex Grossman's squeegee girl.

Orson: He will drop it. And then do a festive dance. I will put Phil Fulmer in charge of your PTA cake walk, and watch him destroy it from the inside with his gossipy ways.

Holly: You're forgetting the cake. You're the one changing his bibs, didn't you know?

Orson: You're in charge of Big Orange's Colonic, though. Randy Sanders will appreciate finally being freed from his imprisonment in Fulmer's duodenum.

Holly: Ssssh. Don't attempt to speak. You've been dropped into an impassable hedge labyrinth entirely covered in bees. It's all right, though. That's the Georgia Tech D-line chained to your left wrist. They're smart lads. They'll have a plan.

Orson: So does Lane Kiffin. Has he told you about the part where you lose to Kentucky yet?

Holly: You're alive! As a reward, you may spoon fat-free Miracle Whip into Ralph Friedgen's maw while he frantically gameplans for Middle Tennessee State.

Orson: The real football power in the state.

Holly: No, that's baby Berry. Remember his name. You'll be screaming it in agony 30 hours from now.

Orson: Eric Berry is a magnificent stallion surrounded by ponies, and tomorrow we eat horse steaks just like Mama Khan used to make them. Shhh. That sound you hear? It's Mike Hamilton choking himself to death with a Raiders bandana. Or the usual goatfucking, as you would say.

Holly: Mike Hamilton is quite twee, you know. He'll fit right down your windpipe. Wanna see?

Orson: No, it's currently occupied by Tim Tebow's penis, as we Florida fans have to take turns with the man. True love waits, but hurried lust can take the one hole in a pinch without breaking any rules. (Just wish Shanoff would share. Selfish!) By the way, afterwards, you shit diamonds for a week. And they said I didn't need to keep my pool skimmer!

Holly: THOSE ARE DIAMONIQUES, MOTHERFUCKER JOKE'S ON YOU. I can actually imagine this exchange taking place in the swamp.

Orson: I will name Lane Kiffin your head coach. < ----THAT ACTUALLY HAPPENED

Holly: See, I thought the point of doing this three years in a row was that we come up with NEW jokes. You can't even make it ten minutes.

Orson: Western Kentucky was quite a test. Big Red shouldn't be asked to play weakside defensive end, though. He's more of a tackle at heart.

Holly: Perhaps Randy Shannon can jog your memory. He heard what you said about his sainted mother.

Orson: ALL OF RANDY SHANNON'S FRIENDS ARE DEAD.

Holly: That's Tom O'Brien on the other line. He wants you to prep his fire-baton routine for America's Got Talent.

Orson: Two ACC mentions in a row clearly mean you've adjusted your idea of football greatness to appropriate levels. You'll love Charlotte. They have a mall!

Holly: I'm going in alphabetical order. You'd think you'd recognize it, English grad. NOW LET US PRAISE THE BIG 12. Dan Hawkins wants to know if he can crash on your futon. You've got a futon, right? Just for a couple days, until he gets his head right. Darrell Scott can run to the groc if y'all need anything. He's getting real good at errands.

Orson: I have decided to improve your quarterback position by having USC's third string punter transfer to Tennessee. You may remember him as Mitch Mustain. His mother's coming with him.

Holly: Spurrier called. He said he just wanted to talk, but he keeps mentioning all his free time and how the air in Columbia doesn't suit his wife. Want him back? I'm sure he could whip those receivers right back out of shape.

Orson: Georgia called. They want to remind you that...oh, that's right. That's the last team you reliably spread cheeks on year in and year out. HIGH FIVE.

Holly: UP TOP...ew. But seriously, congrats on what's sure to be a bang-up title run. Since he won't have much to do this winter, Bob Stoops is coming aboard as a consultant. He's been to the big games. He knows.

Orson: I made you a sculpture. It's a three thousand pound, 15 foot high statue of Ed Orgeron trying to coach a football team. I'm conflicted on the title, though: "Failure," or "Immense Failure." Houston Nutt says you were doin' it wrong.

Holly: Houston Nutt would know from SEC teams doin' it wrong. He says hello. I think it was hello. There was cackling.

Orson: cracklesnacklecrackleGIGGITAHcrackle. I don't even know if these are making sense, as I've been up since five thanks to my in-laws and their geriatric, floor-pissing dog. BUT ENOUGH ABOUT MONTE KIFFIN. I will slap you and call you Casey Clausen.

Holly: I will cut you and call you RONALD ELIZABETH ZOOK. (It's probably Elizabeth, right? I wouldn't know. You would. Because he was your football coach, remember?)

Orson: I do remember. Know how to say Zook in German? Das ist pronounced "Kiffin."

Holly: Kiffykins is more of a wakeboarding type.

Orson: He's been riding the wave of being born in the right place quite well, that's true.

Holly: Nepotism! Does a body good. How IS Steve Jr?

Orson: Not foolishly in charge of a major football program.

Orson: Remember that Steve Spurrier, Jr. cannot possibly be overshadowed by his father's shadow now that the OBC has passed away.

Holly: Sidebar: you know what coach's son I'd swap Kiffykins for? Skip Holtz, for the sole reason that I bet Kiffy would wear a pirate hat to press conferences at ECU as though nothing was amiss. This would be unassailably awesome.

Holly: It's ready when you are:

Orson: The only consolation when Kiffykins makes his exit is that UT and Notre Dame will fight for the same highly coveted coach, and we can exult in the common joy of watching an SEC outmaneuver ND for a coach. Again.

Holly: I will cut you.

Orson: I have named Jonathan Crompton your starting quarterback for the year.

Holly: I have named Wondy Pierre-Louis your starting corner.

Orson: (Only one of these is true.)

Holly: I will fucking cut you.