THIS EXPLAINS SO, SO VERY MUCH

Share All sharing options for: THIS EXPLAINS SO, SO VERY MUCH

Next time a high profile recruit doesn't work out, avoid the messy, unnecessary step of admitting you can't recruit as a coach, and simply fall back on the new hottnezz: "We offered a scholarship to the wrong [INSERT NAME HERE}." Ryan Miller, a fairly common name, happens to be the name of both Ryan Miller, a talented football player at Andrew Jackson Academy ("Where we teach violent AND crazy,") and Ryan Miller, a 6'2", 165 pound track runner and trumpet player at Lexington High School. And the two schools leaning furthest out to recruit this wunderkind who would be broken in half on the first kick return?

Letters began arriving early this summer from the University of South Carolina football office. Then a couple every week from Illinois. One from Tennessee. Others from Charleston Southern, East Carolina and North Carolina State. 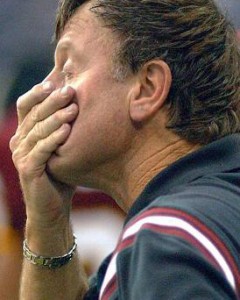 Yeah, this explains a lot. See, we offered, and when he showed up, he had lost 125 pounds, 1.5 seconds off his forty time, and had become white. Durndest thing, I know. Even without their 165 pound lynchpin, South Carolina is improving offensively, but reading stuff like this...

Garcia overthrew several receivers, and that was when the ball wasn't snapped over his head.

...makes us want to send deadly robots back in time to figure out what sapped Steve Spurrier of his J.R. Ewing swagger and turned him into this sad, grass-kicking ghost of a past ass-kicker at Sakerlina. Then, when we found out what did it, we'd take Urban as our coach anyway, but we'd send the robots to kill the cast of Everybody Loves Raymond, because that show deserved to die in a hail of bullets and cyborg flame before it even crawled its tentacled way into existence. Isn't it funny how they all hate each other DIE DIE DIE DIE DIE.