Share All sharing options for: THE JIM TRESSEL MOOD CHART

Perhaps you're an emotional cripple like we are. If you're male, this is doubly likely, since most men could not accurately pinpoint an actual emotion if held at gunpoint. "Happy? Sad? Hungry? All three? Yes. And horny. Add that one in there, too." Aside from occasional drunken brushes with tears during random songs played at bars and the occasional commercial, though not necessarily that old Staples commercial where a husband is caught buying school supplies for his teacher wife even though they're tightening up the belt at home, because crying gustily at that commercial would be for sissies, and THESE ALLERGIES ARE BECOMING OVERWHELMING. Excuse us.

Ahem. To help you get in touch with your emotions leading up to the season, we thought we would help by offering the Jim Tressel Mood Chart. You may find yourself trapped in an awkward conversation where someone asks you about your feelings. This will be with a "woman," probably a "wife," "girlfriend," or "prison psychiatrist." They will all want answers, and because they may have sex with you in the future, you have to give them answers. Since your answers will be terrible, just point to something on this chart as a response. 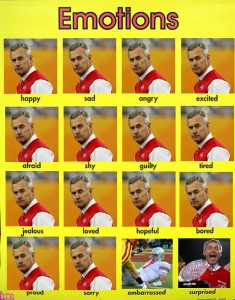 The chart should yield multiple dividends. First, skirts take flight for the winter and and never return under the steely gaze of Jim Tressel: it's foreplay and distraction in one efficient move. In addition to this, your wife/girlfriend/prison psych will assume you're actually trying, and will likely call this "progress." Finally, you can engage in this activity while spending mere seconds away from watching sweet, precious football. It combines emotional fraud and sex, and if the two of those things aren't more arousing as a cocktail than as single, separate, shots, we don't know what kind of emotional bar you're frequenting.

(Product also applicable to women who, as outliers of their species, would rather be watching the game in between sexual encounters and meals, and are trapped with men who want to discuss these "emotions." God bless each and every one of you and your golden haunches.)