This week's Fulmer Cupdate and the Big Board are brought to you by Brian, who remains hung like Sir Reggie Nelson of Concussionville, and by Doc Bottom's Aspray, helping you keep your ass minty fresh since 2008. Enjoy. 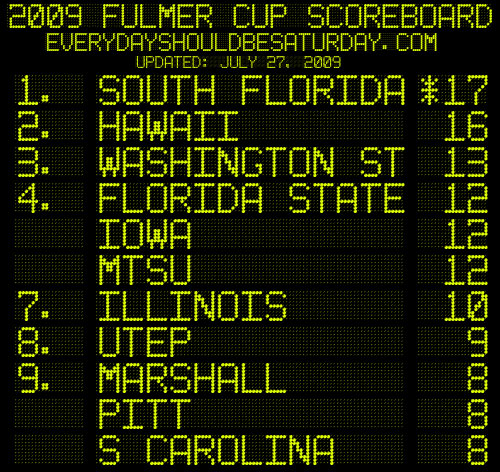 Not even this, mind you. Washington State struggles to win even this game, as the dismissal of all charges in the theft of several bikes--ruled not stolen, but instead taken after being "abandoned"--knocks the Cougars down 12 points and back behind the overall team leader, the Hawai'i Warriors, who would notice this were they not busy enjoying a life in our nation's earthly paradise.* Remember that USF's 17 points all stem from the outstanding and appalling work of one Trent Pupello, a man whose deep passion for pistol-whippin' singlehandedly netted 27 points for the South Florida Bulls.

Barring an arrest for USF not attributable to Pupello, they will not be eligible for the Fulmer Cup team championship. Pupello will instead be this year's clear front runner for the Ellis T. Jones III Award for Individual Excellence, while Hawaii will slip into the lead in what has been a comparatively quiet Fulmer Cup season.

Supenzor'd! Dustin Doe would pick up just one point as a suspended license type, but thanks to our home field policy the Most Favored Gator Nation earns two points rather than one for the charge. Still not enough to get them on the big board after charges of affray against Janoris Jenkins were dismissed, but hold your fire: a month remains, and once they return to campus, the buffet of late night stupidity is hot, steaming, and ready for willing diners to begin serving themselves.

* just behind Shreveport, Louisiana for this title.