The Southwest will be your rich bowlful of ranch dressing with red pepper in it today; feel free to dip a faux-TexMex monstrosity like an egg roll full of taco stuffin's into it for savory Fulmer Cup flavor. 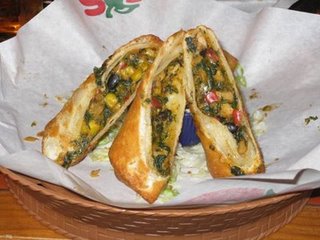 Come, let us eat the traditional eggrolls of my people and celebrate peace together with our tribe's 2 for 1 daquiris.

Your appetizer: The arrests of two New Mexico football players for Fightin' 'n Da Club, bringing two points to the UNM Lobos and rounding out what has been a stellar beginning to the Mike Locksley era there.

The main course is the double arrest of UTEP players Daniel Palmer and Nick Sampson, who beat up a roving stereo salesman in an El Paso parking lot after one dared the other to punch the man, and then take the stereo.

No, really, someone did this. It's in print 'n stuff.

In addition to robbing the victim, the complaint alleges that Sampson struck Aguilera-Mota after being egged on by his teammate.

"Hit him and take that," the complaint quoted Palmer as saying.

Having missed every afterschool special ever made, Sampson allegedly did so, and now has to face the wrath of life's keyboard cats playing the song of arrested, possibly convicted, and also possibly booted off the football team. Hit blend on that semantic blender and wait for the margarita, men:

If both are charged with theft and one with assault, that's a minimum of nine points for the UTEP Miners, who would lose a contributor at running back and another possible contributor at safety to man's unending thirst for fresh, free stereo equipment purchased off the back of trucks in parking lots.