Share All sharing options for: WE FEAR LOST CASH. YOU FEAR NED.

Maybe we're just dodging you because we're so scared of your big selves! That has to be it! Or because we're gay! You know, like gay-tors, because gay people are such timid little people! Pass the cock sandwiches, please! WE'LL TAKE THREE!!!

With the entire rhetorical magazine of the Miami Hurricanes' fan exhausted for them in one easy intro paragraph, we'll move to the particulars. Florida does indeed have no plans to face the 'Canes past the 2013 date, most likely because scheduling another home and away puts a dent in home ticket sales, and that's not something Jeremy Foley wants to do in a recession economy he's already said has forced spending constraints on the Florida program. (We're now down to triple-ply woven silk toilet paper in Meyer's lavatory. Savage, really, what this is doing to us.)

A better question: why you duckin' FIU, bitches? We all know the answer. Three letters that contain more asskick than your entire team put together. N-E-D. 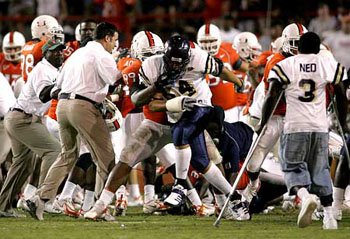 If only we could breed him with SpaceBat and take the next step in human evolution...oh, then we'd be talking progress on a hot skillet, now.