It ain't a party unless the state that brought you a city possibly named "The Shitfaces" brings their 'alif game to the party. 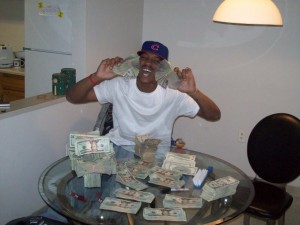 Though City Boyz, Inc. is gone, their industrious spirit lives on. Adrian Clayborn, Hawkeye defensive end, believed a gentleman cabbie was hurrying him by honking at him in the midst of a traffic jam. Seeking to teach the man a lesson in wasting precious gasoline by riding the brake in a traffic jam--watch those expenses, young entrepreneur!--he then confronted the young man win a proactive manner and struck him in the face.

Clayborn, the misunderstood business coach, has not been lauded for his efforts to improve local business practices and will instead be charged with Assault Causing Bodily Injury, a "serious misdemeanor" with a max one year jail term and $1500 fine. (We love those "glib misdemeanors," like "pressing genitals to plate glass windows in public places," and "behaving in an O'Tooleian manner.)

One point for Iowa in the Fulmer Cup, awarded without bonus points because the Hawkeyes have been quiet lately.