YOU'RE LOOKING LIVE: A SNEAK PEEK AT BRENT MUSBERGER'S AUTOBIOGRAPHY

Share All sharing options for: YOU'RE LOOKING LIVE: A SNEAK PEEK AT BRENT MUSBERGER'S AUTOBIOGRAPHY

Harper Collins is excited to announce they will be releasing Brent Musberger's You're Looking Live!: A Life On Air. Previews here are made available courtesy of Harper Collins and Mr. Musberger, whose colorful life story leaps off the page in a series of anecdotes told by the man himself without a ghostwriter or editor. Take it away, Brent!

Havana, 1973. The crystalline blue waters of Havana: they heal the soul. I'm there with Fidel, and the good times are flowing between the two of us like so much cheap government-subsidized rum in our glasses. I kid, folks: Fidel only drinks Bacardi Gold, and leaves the Cuban insecticide-laced pisswater to the little people who make it all happen. Natural leaders get natural privileges, Woody Hayes used to say, and I couldn't agree more. That's why I let him take my first wife for three years without saying a peep. Sometimes you fight for 'em, and sometimes, you just let the bigger bear take the salmon.

"Brent, I'm thinking of turning this entire island into a rollerderby theme park." He pissed off his balcony as he said this. Old Fidel just let it fly wherever. He used to tell me the podium at the UN had a groove worn in the back of it from his stallion's stream he fired while giving one of his four hour speeches there. I checked one day. He wasn't lying. The whole thing smells like cigars, rum, and gasoline. The smell of man.

I told him it was a great idea, and then threw the bottle off onto the sidewalk. There was a scream below. We laughed! Oh, how we laughed. Here's the two of us last year at Fidel's birthday. His hand does that in every picture of him, no matter what camera you're using.

Kruger National Park, South Africa, 1990. I'm not saying our love was always right. But it was never wrong. 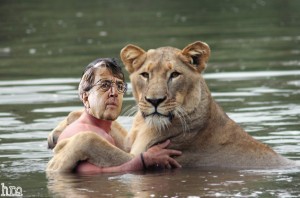 Nicaragua, 1984 Phyllis George had just left me, the season was over, and I needed someplace to die without having to kill myself. I rolled into Managua with $45 bucks, a rusty Glock, and all the pain a man could carry with him without breaking under its sad, inescapable gravity. I was no one. I wanted oblivion. This was it.

I hooked up with a ragtag bunch of boys. You called them Contras. Hell, I called them by their names: El Salchicha, the Condor, Dr. Sodomy, Peanut, Tim, Captain Bananas, and the Human Porch. I lived and fought with them for eight months. I relearned the song of life one note at a time: the basso profundo of a 120 pound bomb slamming into the side of a mountain, the baritone of a mortar, the high falsetto of a tracer whizzing by your head in the night.

I felt alive for the first time in the dark Nicaraguan night.

I had to leave when preseason cranked up and they started sending lawyers, guns, and money to find me, but if you're ever in Managua...just tell 'em El Pollo said hello.

The post CBS period was difficult for me. I picked up work where and when I could, even with a crazy little startup out of some place I still can't pronounce. Cutter? Gutter? It all sounds like sweet American when it's getting you the rent money, even if you got trailed by the CIA and occasionally abducted for lengthy interrogations. This little gig paid for the beach house in Aruba. I'll always owe them for that.

As for the banner? I'm not saying I've always been on the winning side of history, but pardner lemme tell you this: I've never sat on the sidelines, either.

You're Looking Live! A Life on Air will be finished and in galleys in 3-18 months, depending on how the editing goes. Special Aroma-vision Version to be available for just $138.95 on Amazon.com and at all major booksellers nationwide.