Share All sharing options for: WHERE IMMIGRATION LAW AND COLLEGE FOOTBALL MEET

Sometimes we have to justify all the lingering bits of immigrant/refugee stuff floating about in our heads. Pardon the mess, but here's one instance of that in a college football-relevant manner.

Here's a joke: why don't immigration lawyers go to hell when they die? Answer: because that would be redundant. Little illustrates that better than the case of Anthony Zehyoue, the former LSU defensive end whose entire family may be deported from the United States thanks to the expiry of their TPS--Temporary Protective Status, a kind of sub-refugee status allowing for temporary refuge in the United States from whatever's going on in your country. (If the initials are redolent of another bureaucratic absurdity, well, the similarities are a darkly humorous coincidence only.) 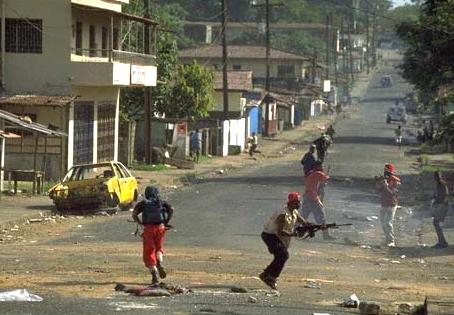 Yes, that Liberia. The one printed on maps with flames coming from it for about 20 years.

Now here's where we get to crack out our funstick from a former life as refugees: TPS is a non-fungible status, meaning if you enter the country under Temporary Protective Status, you're that forever. You can't upgrade to being a refugee, you can't apply for citizenship, and to put it eloquently, you can't do dick besides just sit there and be TPS until it's time to go back.

Zehyoue and his family are the sort of hard-working, self-reliant American types Americans like to think we are: degree-earners, successful, etc.

Had they been slower in fleeing Liberia, they could have earned full refugee status simply by following the wave of Liberians who fled to a Cote d'Ivoire or Ghana and then funneled in through formal channels to become refugees, a path that leads to permanent resident status provided you don't get arrested, do your paperwork, and otherwise leap through the appropriate number of hoops.

It is a cruel irony that Zehyoue and his family--along with the first wave of fast-acting non-refugee Liberians who arrived and got TPS status--are being punished for being quick to recognize just how hellish the situation was getting in their home country and for acting quickly. It is solely cruel (and not ironic) that their fates now sit in the hands of DHS, the fetal government bureaucracy so huge and unwieldy that the processing times for passports and refugee visas has slowed to a crawl for all cases. Something as messy as the expiry of the TPS policy for Liberians will pass through its gullet like a toaster through an earthworm: with ugly and spectacularly bad results.

The worst part is that the youngest Zehyoue--the fifteen year old daughter--won't have to leave because she was born in the US. She'll be separated from her family, who if they are deported will be probably be ineligible for a substantial period of time. (Forcible deportations due to overstay are usually ineligible for ten years; nastier stuff gets you a lifetime ban, like the one given to Dennis Franchione when he was deported after his final season at Texas A&M. Enjoy Buenos Aires, Coach!)

It's a deep and awful legal vortex they've been sucked into, and probably the only time you'll hear Les Miles, Dennis Dodd, and ourselves all land on the same side of a single issue. This is either indicative of an approaching apocalypse, or a sign of a situation so clearly unfair to a group of people that even three idiots can recognize the absurdity of the situation.