Our much-delayed Fulmer Cupdate runneth over with Ball State leading the way thanks to his offences both as a person, and as a Ball State football player.

Le board, courtesy of Brian, who as always is hung like Reggie Fuckin' Nelson. Notes without clarification or apologies follow. 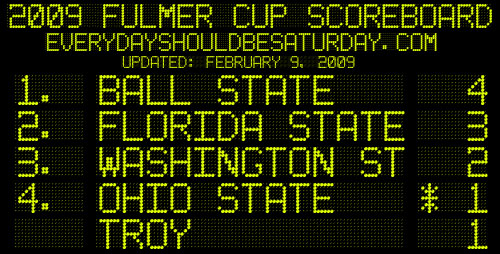 Dane Cook's refusal to pay a cabbie and subsequent arrest-related party tricks earn Ball State 4 points, a formidable total for Muncie, yes, but one that like a sprinter's early lead in the Tour de France will likely be erased by serious, heavy lifting work from a large state school recruit who throws a fellow student into a tree shredder at a party, plows a forklift into the side of a water tower, or otherwise eclipses this total in one fluid motion. Ball State, you're the Tom Boonen of this race: enjoy the maillot jaune while you have it.

An honorary point was assessed for Alex Boone, the Ohio State offensive lineman who was technically ineligible for points as he had played his last game for the Buckeyes, but who did such an outstanding job going apeshit and resisting arrest while blind Viking drunk that NOT honoring him would have been a crime in itself. A single ceremonial point is awarded to Mr. Boone and the Ohio State University; this point will not serve as a tiebreaker in the event of a tie, nor will it figure into the actual standings of the Fulmer Cup.