PLEASE STAND BY WHILE WE SHARPEN THE BLADE

Share All sharing options for: PLEASE STAND BY WHILE WE SHARPEN THE BLADE 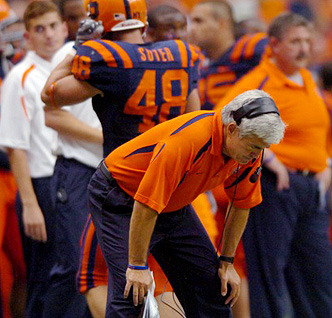 Greg Robinson, demonstrating the position he has put Syracuse in as head coach.

Perhaps the first swipe of fall's frosty scythe across your soul has chilled you to the bone, and made you think of death, the impermanence of things, and the fragility of life. Tough shit, buttercup: at least you're not working in a job where they're openly canvassing the neighborhood looking for your replacement.

Syracuse has hired former Big Eight commissioner Chuck Neinas to assist them in their search for the next head coach of the Orange, all while Greg "Gerg" Robinson is still set to take the field with the team for the remainder of the season. There's denials a plenty in Pete Thamel's NYT article and lots of agony to go around, but the most painful single graf in the whole piece may be here:

The prospect of Edsalls ending up on the Syracuse sideline is unlikely for several reasons. The financial cost would be high, and any intraconference coaching change could engender bad feelings. Also, the UConn football program has perhaps surpassed Syracuse in status in the Big East.

Remove perhaps, and it would be perfect.

So mope around blasting the Cure on your iPod all you like with the leaves blowing around you, but at least you aren't picking up a paycheck waiting for the hammer to fall after driving an already fading program nose-down into the basement of the Big East.