It is a common motif in interviews for [NAME REDACTED] to be just cleaning up after a shower. For some reason, he is forever just entering or exiting a bath of some sort during interviews, leading us to think he wishes that, like a cat, he could just self-clean on the go. Science eventually prevails, though. 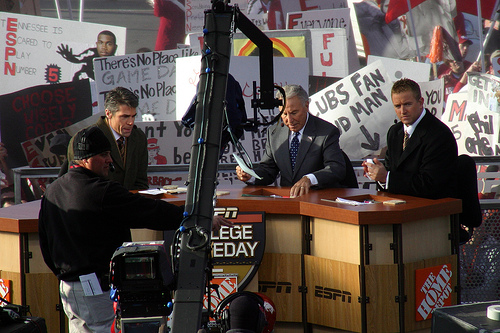 Graying Chris Fowler: Big matchup coming this Saturday when the Illini go to Camp Randall to face the Badgers. We'll be right back with Coach [NAME REDACTED].

Head of Lee Corso in Jar: CHANGE THE LIQUID IN HERE! I CAN SMELL MY OWN FACE!

Kirk Herbstreit: Hey, can we get LC some fresh head punch here?

Fowler: Every day I dream of a life I will never have and a death I cannot confront.

Make-up tech: What did you say? Could you turn to the left a little?

Herbstreit: Hey, how about a little touch-up over here?

Director: Stop it, Kirk. We all know you don't wear or need makeup on television, and never have!

Herbstreit: I know! HA! (A bluebird lands on his shoulder. He exchanges high-fives with its tiny little wing.

CORSO: WHO'S PUTTING THE HAT ON ME THIS WEEK?

Fowler: Does it matter? Does any of this...matter?

Director: He should be walking up any second, I mean I sent HOLY MOTHER OF GOD 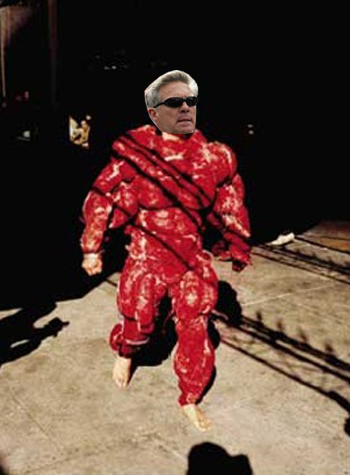 [NAME REDACTED] Heya folks. Glad to be here. Good to see ya. Gotta get on the stage. Questions to answer. Gotta talk to people. Makin' it happen. That's the Zooker. Hey, howya doin?

[NAME REDACTED]: All that showering. Too time consuming. Callin' recruits in the shower. Freakin' people out. Didn't like talking to the Zooker naked. 24 minutes of every day spent in the shower. Now, BOOM! 24 minutes the Zooker's got to make it happen some more. Ya likin' it?

Corso in Jar: I'M LIKIN' IT! YOU LOOK CUT, BROTHER!

Fowler: And now horror has made my waking and my nightmares one and the same.

[NAME REDACTED]: Feel free now. Except for the plastic wrap. Gotta put it down wherever I go. Leaving little gooey splotches. Moms don't like it. Ruins the couches. Shouldn't shop at Rooms To Go anyway. Helpin' you out a splotch at a time.

Director: Thirty seconds! Get him miked, and wear a gloves when you do.

Corso in Jar: SO WHEN DO YOU TAKE OFF THE FUNNY SUIT?

[NAME REDACTED]: This is my suit. Gotta like it. Getting better every day. Less skin, more win. That's what we say at Illinoise.