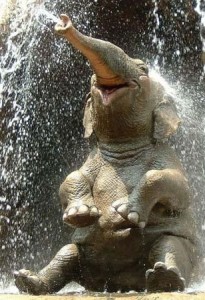 Please, people of Alabama: have mercy upon the endangered elephant. As we speak, you or one of your brethren is crouched in the bed of a safari truck, aiming a high-caliber weapon at the oblong skull of a bull elephant somewhere in the wilds of Africa.

Though you may be tempted to shoot it, sell its hide, and then immediately place its knee ligaments in a transplant cooler bound via air freight for Tuscaloosa, do not: Terrence Cody's timing belt-sized MCL, sprained though it may be, requires no replacing, per ESPN reports:

Alabama coach Nick Saban is supposed to update Cody's situation later today. He's expected to miss the next week or two, but should be back in time for the LSU game on Nov. 8.

This is good news for the elephant, since you will not be taking the ligaments from its knee to put in Terrence Cody's knee, a joint of similar size and load-bearing strength. This is also good news for Alabama, who have taken advantage of Cody's mutant size to play a 4.5-3 defense and take the Tide to the fourth spot in rushing defense nationally. The Cody Effect was just as prominent in his absence Saturday: Hinton points out that Ole Miss scored on the drive Cody left the game and took five of the next six drives into Bama territory.

If you have already pulled the trigger and shot the elephant, however: give your guides ten percent, sell the meat as "jumbo buffalo" in the markets of Dar Es Salaam, and see our close personal friend Amir Massoud at the docks in Zanzibar for assistance with the rest of your "luggage." He's good people.