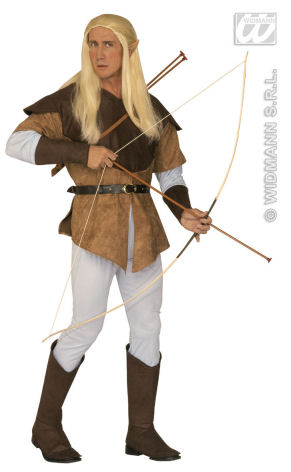 Your football is your dagger. Your arrow is your jockstrap.

You are not shocked that Mike Leach has a deep understanding of every subject known to man. He understands the proper use of cyanide gases in mining, the role the Asian Marmot played in the spread of the bubonic plague, and can lecture you at length on the complex barter systems used by the Maya in building their relatively modest but intricate Central American empire. He also may do this over the phone while defecating or ordering fast food (but hopefully not both.)

Therefore, you cannot and should not be surprised that Leach not only has a deep understanding of elves, but has imparted this knowledge into his playbook and by extension, his continually baffled players.

"He calls me the evil elf because he has all these different things; elves are small; they're generally pretty mean and they corner well," Morris said. "They're good with a dagger; he goes on and on about how elves have different traits, and he thinks that I fit the traits of an elf. He thinks that I do well with the football in my hands and calls the football my dagger."

We don't know if this is true, but we'll say it because it might be true: Mike Leach wrote most of the text and updated rules for Dungeons and Dragons: Demonweb 5 And if he didn't, you can make damn sure he's working on the revised edition of the Dungeonmaster's Handbook due out this spring.

He deserves points for not just referring to it as the "WildRaider" or whatever other use of "Wild-" as a prefix you care to slap in front of your team's name to denote the Wildcat formation where you take your most talented, slippery players, put them in the shotgun, and then just see what happens. He also deserves a 2D+CHARISMA MODIFIER for actually putting a little picture of an elf in the playbook, which he actually did because he is Mike Leach, this is his quest, and if you don't like the way he's running it then you can take your carefully sculpted Mage figurine and head home, okay?