Welcome to our Factor Five Five Factor Preview of Louisiana Tech versus Boise State. The historical rivalry continues. Remember, men died in this rivalry, grown ones with children and beards, so respect this rivalry for what it is: a cross-country WAC showdown between two teams who've sort of kinda hated each other since July 1, 2001. Don't disrespect seven years of mild distaste like we know you want to, philistine. Boise State keeps them corks poppin'. 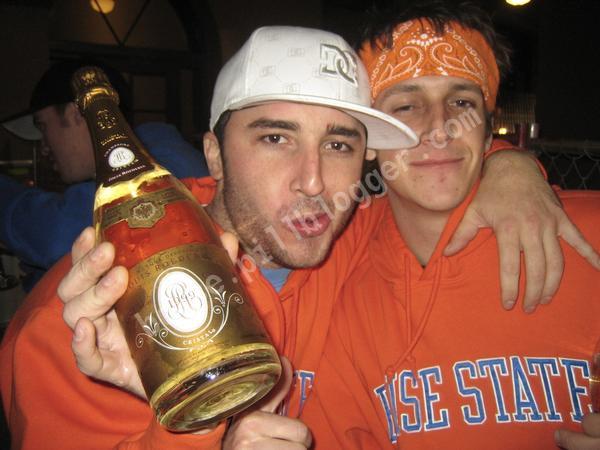 From the Pillblogger, who helpfully watermarked that superb image.

Category one: Nebulous Statistical Comparisons of Dubious Validity. For Boise State, it would be 100, the number of victories that a win tonight over Louisiana State would give them on the Smurf Turf, a number that won't matter a bit if they don't strap it on and get out there and play like their asses are on fire! [/coachspeak'd]

Another number: Kellen Moore, 7, or his rank in terms of passing efficiency nationally.

Moore has not racked up those numbers against free kills, either: Moore's best game came against Oregon, where he went 25 for 37 with 386 yards and 3 TDs against Oregon. He's the Boise State qb, and is therefore efficient, well-coached, sensible, good with money, polite, and a good but not annoyingly flashy cook in the kitchen.

The Nebulous State of Dubious Statistical Validity for Louisiana Tech: 22-13 over Mississippi State. What will be forgotten in the mists of a month ago is that the stunning upset of the Starkville team who identify themselves as Bulldogs was largely the result of the Legion of Croom making horrendous mistakes (Wesley Carroll threw four picks in a night, though to be fair, it was a vast improvement over Michael Henig's 6 interceptions thrown in the 2007 opener. Improvement, like any quality, is defined in a relative manner.)

In reality Louisiana Tech is a 91st ranked offense and a 109th ranked defense about to play Boise State at home, or more metaphorically, they're you on a night when the kids/wife/boyfriend/girlfriend/roommate is out of town, and there's a freshly rented adult film sitting on the table next to a bottle of lubriderm and a six pack of beer. You'll feel bad afterwards about letting circumstance take you down the obvious path, but gravity always finds a way, and in the end it will have all seemed inevitable anyway.

Category Two: Mascot: Neither team can find a suitably unique mascot for themselves, so the relative strengths of either are weakened by fighting over shared and thus slightly debased territory.

Louisiana Tech, like three out of every ten teams in the NCAA, uses the bulldog, the deformed, inbred, affable, and inevitably flatulent descendant of the English Ruffian Throatripper, a dog bred solely to tear the tracheas out of people who owed you money. Now, after years of professional breeding and training, is conditioned to eat, fart, sleep, and do whatever its master tells it. If this sounds like a direct metaphor for your life as a young man contrasted with your married life, IT IS.

Buster Bronco enjoys a freer life, though he does have a perpetually open mouth, which frankly may be appropriate given the potato-worshiping yokels in rural Idaho who live and die with Boise State football. (Don't think this wouldn't be appropriate for other schools, though: why do you think Albert the Alligator's mouth is open all the time?) Buster does have a grueling training regimen, though, and looks way better going through those agility drills than we ever did.

He never takes his eyes off the ball! Because he has no eyelids. He also only shares a name with the Western Michigan mascot, and not half of the other mascots in D-1.

Category Three: Aura. Have you seen the color-coding? This sort of order is only possible in a place as homogenous and tranquil as Boise State. This also means that they're probably capable of genocide, since that, too, requires great coordination, order, and clearly drawn ethnic boundaries. Having the "Problem From Hell" on your side in theory has to amount to a serious homefield advantage, if only for intimidation factor. Also, lack of tasty spicy Creole butter in Boise pregame fare will likely leave the La. Tech players woozy and filled with an undefined sadness.

Category Four: Names. Louisiana Tech has Jonathan Zeno. You carry the last name of our favorite pre-Socratic philosopher, you get factor'd.

Grudges? Scores to settle? Sheer cussedness? Boise State is at home, where they crushed La. Tech 55-14 on the Bulldogs' last visit to Boise. Louisiana Tech has not beaten Boise since 2001. This either means that:

A. A spunky Louisiana Tech team overmatched in talent but underrated in heart is coming to stun the WAC juggernauts despite the indications of all available data points!

B. The Bulldogs will assume the mating position and take the Catherine the Great treatment for four quarters from a surging Boise State squad.

We're betting on the trend of things supporting the latter proposition. NEEEEIIIIIIIGGGGHHH!!!