An item in Monday's Curious Index referred to television presence Pam Ward as a "football analyst". We realize this may have given our readers the impression that Pam Ward provides analysis of football games or speaks cogently (or even coherently) on football-related topics. This impression is patently inaccurate, and we regret the error.

On Wednesday, the caption for the following photo was listed incorrectly. 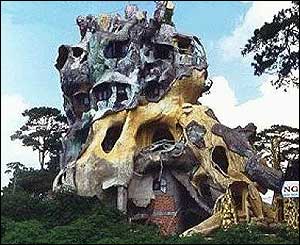 It is not, as we listed, the "Jungle House" in the Dominican Republic that former coach Bobby Pruett used to entertain Marshall football recruits.

The real "Jungle House" had a helipad and one of those windtunnel phone booths filled with cash used in radio promos, along with many hot tubs filled with naked local women. The house pictured actually belongs to Space Emperor and Michigan punter Zoltan Mesko, who just dares you to try to come within five miles of its impregnable defenses.

On Tuesday we reported that Navy head coach Ken Niumatalolo has accepted an offer to join the Broadway cast of Wicked following the 2008 football season. Coach Niumatalolo explains in a follow-up interview in this week's EDSBS THE MAGAZINE that while he was thrilled to be approached, he feels his voice is better suited to legit pop than belting and wants to preserve his talents to record a solo album. We regret the error.

Tuesday's "Trends and Friends" segment mistakenly identified the motto for this season's Texas Tech Raiders as "We ARRRRRRRRR Texas Tech." They have no official motto for the 2008 campaign. We regret the error.

In Wednesday's interview with Nate Longshore, we reported that the Cal quarterback can frequently be seen on campus engaging in vigorous energy policy debates with his imaginary friend, a unicorn named Fizzywinkles. Mr. Longshore's companion is called Merriman Poole. We regret the error. 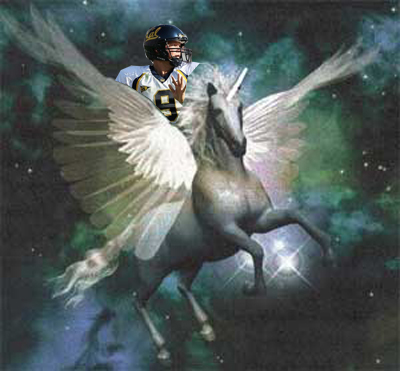 On the contrary, whether you favor the cap-and-trade model or a carbon tax, you miss the central impediment, which is to say, either could be ineffectual due to substandard implementation and design.

In Thursday's piece "Tim Tebow: The Contract Rider", our staff made several erroneous inferences. "Fluffernutters and The Sound of Music" refers simply to the fact that Mr. Tebow enjoys relaxing in his dressing room after appearances with a Fluffernutter sandwich and VHS copy of the classic musical. Any other implications are factual inaccuracies on our part. We regret the error.

This concludes the Corrections for this offseason. Real, actual football discussion based on actual football games being played, actually, will be the order of the day by this time next week. Thanks to Pam Ward, without whose unfortunate verbal meanderings ("He's out of this week's game with some criminal trouble...I'm sorry, that's a hamstring") this feature would not have been hatched. And for the last time, Columbia, South Carolina is the maw of Hell. --- Not an error.