An item in Monday's Curious Index reported that snack-sized LSU sprinter Trindon Holliday has been clocked in the school's by school scientists running a sub-4.0 40 in full pads and cleats. We neglected to fully source the circumstances of this athletic feat, and have since learned that Holliday may have accomplished this time with what the biology department is calling "gravitational assistance." 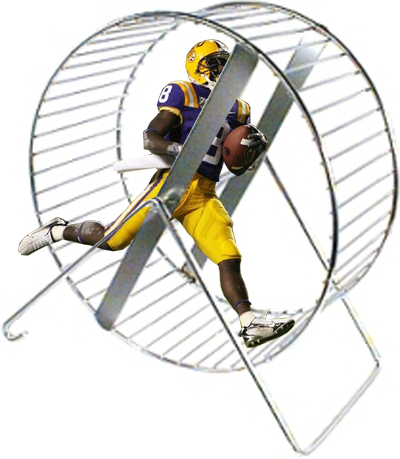 On Wednesday, we reported that Mullah Ibn-Al Ali Qutewa of Pakistan, a radical Muslim cleric currently believed to be residing somewhere in the Hunza valley according to the CIA, had pronounced a fatwa and called for the death of Texas Tech head football coach Mike Leach. This was an error in translation, as "dirka dirka jihad football coach" actually translates to "Wipeout host John Henson, who according to Qutewa "is no Vic Fucking Romano or Kenny Blankenship, and will never be, you revisionist infidel assholes."

Leach has since spoken to Qutewa, and will take an ultralight to visit the fugitive cleric in the pre-bowl season break, inshallah. Henson, meanwhile, is "safely ensconced inside an elaborate obstacle course," according to ABC officials.

led with the following passage: Derived from several clones brought into Oregon from Burgundy, 30% is UCD 5 (Pommard), and the final 10% either UCD 1A (Wädenswil) or a clonal- blend. With its wide variety of origins and clones, displays both red and black fruit aromas (cherries and raspberries), on the nose and the palate. In addition, one finds a light touch of brown spices (nutmeg, cinnamon, allspice) and even a little black pepper. True to our house style, elegantly textured with satiny, polished tannins showing in the finish. Pair with salmon or ahi, veal or pork, poultry (think duck) or beef, and/or hearty vegetarian entrees. This actually describes a 2006 Willamette Valley pinot noir, although our editorial staff does recommend the duck. We regret the error.

In an interview Monday, we reported that Brent Musberger's list of conquests have included Phyllis George, Congresswoman Maxine Waters, the Indian actress Aishwarya Rai, a particularly saucy snack machine in the old CBS studios on 42nd street in New York, the abstract concept of justice, Sebastian the Ibis, the entire cast of Stargate SG-1, and the Cotton Bowl.

This was inaccurate, as Mr. Musberger has been in a committed, monogamous and rewarding thirty-seven year relationship with the city of red-blooded Americans known as Grand Rapids, Michigan. We regret the error, and wish the Furniture City and Mr. Musberger continued happiness.

Tuesday's edition of Big East Market Watch incorrectly attributed the plummet of the dollar's purchasing value in Kentucky to a nationwide economic slump. Further analysis indicates the widespread and burgeoning poverty in the region is the work of former Louisville head coach Bobby Petrino. We regret the error.

In Wednesday's Weekly Notre Dame Unfounded Excoriation column, Fighting Irish head coach Charlie Weis was referred to by our staff as a liar, gladhander, jackhole, asshat, motherless mongrel, douchebag, douchetwat, twatwaffle, and filthy cheat sullying the sacred college game. Upon further review, we have concluded that Coach Weis' cheating took place at the professional level, and concede that were he to resort to illegal measures at the collegiate level he would be fielding better teams. We regret the error.

In Monday's Farmer Almanac segment, we listed the sunrise on October 15th as 7:20, EDT. The sun will not rise that day. Roosters will not crow; dogs will pace nervously. Temperatures will plummet across the northern hemisphere, and weather patterns will stagnate as the world slips into a quiet coma of eternal, freezing night. Humanity as we know it will end.

Then you will agree to buy Oklahoma offensive lineman Phil Loadholt The Cracker Barrels Country Boy Breakfast® he so obviously deserves, and he will bring back your precious sun, earthling. Then you will help Phil solve the ages-old riddle of the golf tee pyramid. You almost let this end civilization as we know it. Your bitch attitude will be the end of us all.