Public policy rarely affects demon football, but occasionally an event happens that is so large if blunders its way into everything in your life whether you like it or not: a natural disaster, disease, the release of Grand Theft Auto: 4...it happens from time to time, and it just happened to Florida high school and college football thanks to the biggest environmental buyout in the state's history. 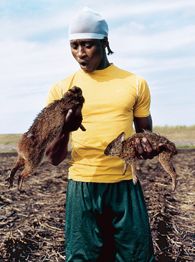 The state of Florida will give U.S. Sugar $1.75 billion dollars for its holdings in the Everglades, a swath of land totalling 187,000 acres in size. The purchase constitutes an immense step forward in the state's plan to reestablish the Everglades to at least a zombified version of its former self, offsetting one hundred years of haphazard development and Keystone Kops engineering by the Army Corps of Engineers.

(Who really can't be blamed: everything they were told to do turned out to be impossible, counterintuitively destructive, or just plain harebrained, like accidentally salinating the freshwater table in South Florida with drilling. Florida's like Harry Potter's hair; no matter how it's cut, it just tends to take the same wooly, unmanageable shape no matter what you do.)

Football enters the equation in this fashion: U.S. Sugar is headquartered in Clewiston, and with the buyout the company may cease to exist at all--taking with it the main source of income for not only Clewiston, but for Belle Glade and Pahokee, the legendary "rabbit-chasing" football talent wells producing Fred Taylor, Reidel Anthony, Anquan Boldin, and many, many others, the buyout means their towns have been given a terminal diagnosis. The fields will be converted to reservoirs, and the main source of these towns wealth will go back to being what it was before: namely, the drainpipe for the entire southern half of the state.

What will remain after the cane leaves?

"A few churches, some sod farms, and a little cattle," according to a friend of ours familiar with the area. "These places look like they're out of Oh Brother Where Art Thou already." These towns, for all intents and purposes, will cease to appear on the roster in two decades, ending an era of Florida college football and drastically shifting the recruiting map in state.

Appreciate, if you will, not the ample opportunities for political points-scoring going on here, but the curious consequences of what just happened: an act of public policy impacting regional football life. The rabbits won't have anywhere to run, the cane will be pulled up in favor of grass, and the Muck City mythos will be covered up in the confluence of environmental policy and globalization.

Naturally, being a blogger, we blame the curse of ESPN for all of this.