Tuesday's "Coaches in Media" report incorrectly identified Arizona State head coach Dennis Erickson as the face of the Dos Equis "The Most Interesting Man In The World" campaign. As of press time, Coach Erickson is not affiliated with Dos Equis in any professional capacity. We regret the error.

Our Wednesday profile piece on Mike Patrick described his hobbies as baking, reading the early poetry of Wordsworth, and rubbing his dirty underwear on public drinking fountains when no one is looking. One of these is inaccurate; we regret the error.

A Monday night editorial took the position that University of Florida quarterback Tim Tebow would make a terrible companion in an adventure film, as his do-gooder nature would press him to ensure that any treasure discovered under the sea/in the desert/in the jungle would make its way to the descendants of worthy indigenous peoples and not to finance a sweet houseboat. Upon being informed of Mister Tebow's medical prowess, however, it is the position of the EDSBS staff that his skill in dressing and suturing field wounds would prove invaluable and that his squinty blue eyes would look totally boss gazing into the distant sunset on the one-sheet. We regret the error. He's so dreamy! In an unforgiving, all-slaughtering Christian gladiator kind of way--ed.

Tuesday's Curious Index identified the Zodiac Killer as former UCLA coach Terry Donohue. This is inaccurate, as we all know it was Lil' Red. We regret the error. Because man is the most dangerous animal...

Wednesday's bulletin stating that the Iowa Hawkeyes have canceled spring practices was inaccurate. The management, while standing by our reporter's account of empty locker rooms and silent practice fields, concedes that it is possible there may exist players not yet arrested or dismissed from the team, perhaps frightened by strangers into hiding under benches. We regret the error.

A dispatch from South Carolina's spring practices on Thursday stated, "There is evil there that does not sleep. It is a barren wasteland, riddled with fire, ash, and dust. The very air you breathe is a poisonous fume." This is a passage from J.R.R. Tolkien's The Lord Of The Rings, and was improperly attributed to the city of Columbia instead of the hellish inferno of Mordor. We regret the error. 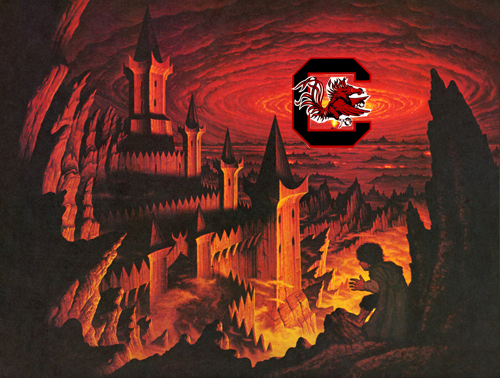 Mordor's architecture is far superior. We regret the error.

In Tuesday's "The People In Your Neighborhood" interview, a Starbucks barista who regularly serves Washington Huskies coach Ty Willingham recounted his stormy dissatisfaction with the chain's new Pikes Place brew. This was based on false information and bad sourcing. A spokeswoman for the UW athletic department released a statement stating that while Coach Willingham is not a fan of the lighter roast, he recognizes that the baristas can only do so much with the quality of beans available to them. We regret the error.