Share All sharing options for: ASK A KOMODO DRAGON.

In our discussion of important offseason questions, we have a special guest today: Tulip, the Komodo Dragon. Enjoy. 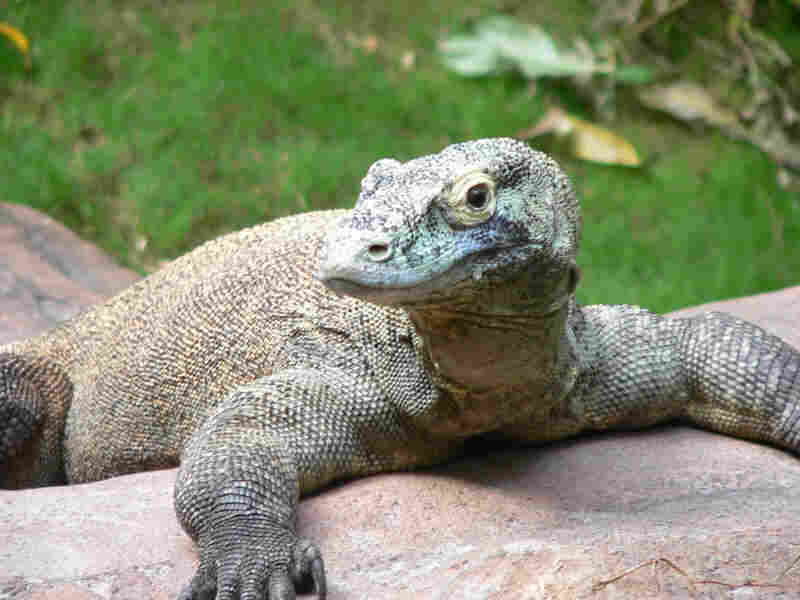 Dear EDSBS: What are the chances Auburn will get Kodi Burns up to speed in a year in the new "spread eagle" offense?

Orson: Very good, as they've already had the offense in place since the bowl game, where it looked creaky, half-assed, and pretty much as one might expect an offense installed just before a bowl game would look. Fortunately for Auburn, creaky and half-assed offense in spread formations represented a refreshing change from the moldy West Coast formations Auburn sputtered out of all season long.

The operative words for this spring: repetitive motion injuries. Or the possibility thereof, at least: new offensive coordinator and Hal Mumme acolyte Tony Franklin's attack passed 517 times in 2007 at Troy and ran 462 times, averaged 81 plays a game, and will take their espresso topped with crystal meth-infused whipped cream, please. They're throwing zillions of passes in practice, as opposed to the fifteen soft tosses a game required by the Borges offense. (Brandon Cox: "I got that, brah. No worries.")

In short, um: short passes, concept football, and a good smattering of freedom to run for the quarterback. In goal line situations, you'll even see a variation of the Tebow Smash play with Burns, who is a better runner than Omar Haugabrook was for Franklin at Troy. All in all, it sounds like a fine idea after the offensive Sargasso Auburn's slogged through for the past two years, though Tuberville could have saved the school some coin in the hire: for only $3,000, you too can have THE TONY FRANKLIN SYSTEM!!!111

KOMODO DRAGON: KHHHHRRGGGKDSSSSS worked out the last time they broke in a new OC GHGHRRGGKKKKSSWSSS!!! HRRGKKSSSSKSKSDFHDJSKK!!!!

Dear guest columnist: What are some realistic expectations for Bo Pelini in year one at Nebraska?

Orson: Let's just go ahead and say that last year, each Nebraska defender wore a wrist band with five options on each play, all terms exclusive to what we'll call the KEVIN COSGROVE SYSTEM of football defense.

So, one can clearly see it was not a matter of talent that kept them from achieving what should have been a level of near-competence--it was a complete inability to know where to be on any play, or how to pursue a tackler. Watch the footage from the Texas Tech implosion to see just how indecisive Nebraska defenders were on every single play.

Cosgrove appeared to be relying on the Force alone to guide his charges. With Pelini, the targeting computers are on and and locked: dammit, Nebraska might give up a long TD or two on missed coverage, but someone's getting knocked the fuck out in the process. Nebraska's got three cupcakes, then this stretch:

Missouri: Win, since Missouri's working their own stuff out here.

@Kansas State: Depends. Is KSU favored? Then a win for the Huskers. Is KSU a dog? Then Nebraska loses, because that's just how Ron Prince twirls his 'chine, baby.

So without getting into fan fiction territory, a 7-5 record isn't all that far-fetched at a quick glance. Considering that they just likely lost a key element of their offensive line to an alleged ill-advised sexual assault in a bar and will be working a new qb in with the departure of Sam "Oh, That Transfer Worked Out Marvelously" Keller, a cautious optimism with early season stumbles and late upturn doesn't seem like madness to predict.

Dear guest columnist: was Illinois' Rose Bowl run last year all smoke and mirrors, or have the Illini really turned the corner as a program?

YES YES YES Sorry, sorry. We have that reaction to seeing 9-3 associated with [NAME REDACTED], but what we've really stumbled on is a tricky question of group dynamics and evolutionary history here. Is Illinois the housecat set loose into virgin Hawaiian territory, an otherwise mild creature turned ecosystem-wrecking beast? Or are they a rising panther in the jungle of the Big Ten?

We'd lean housecat thanks both to the loss of Rashard Mendenhall and the decrepit state of the Big Ten right now. (Now with not one (Penn State) but two (Purdue) transitional monarchies!) Juice Williams will have to throw the ball even more this year, and the noise you just heard was Illini fans crapping a thousand pairs of pants at once. Despite the turnover giveaway, it's looking like 8-4, and no, not entirely done with smoke and mirrors, but also not done in a conference with savage top to bottom competition. (Discount our obvious and proclaimed SEC homer status, and compare them top to bottom with the Pac-10 for an equally unflattering comparison.)

Dear guest columnist: Just how much will Matt Ryan be missed at Boston College?

Less than one might think, since they might actually have some offensive balance this season. When the going got rough, Jeff Jagodzinski morphed into Mike Leach in a turtleneck, hitting the fifty pass mark six times in play calling. This is a system, and we genuinely don't believe--as SMQ posited in a brilliant observation--that Ryan was really that different than Drew Weatherford. Meaning: the reads and throws in the Jags system are plug and play, and 9-3 in the ACC again doesn't seem unrealistic, especially considering their shamefully anemic out-of-conference schedule: Kent State, Rhode Island, UMass, and Notre Dame. There's four automatic wins right thurr--toss in .500 in the ACC, and we're talking 8-4 here.

Dear guest columnist: Will Ty Willingham get Jake Locker killed, or actually attempt to protect him in the Huskies attack this year?

Yes, he will. Get him killed. Shame: Locker can survive even the most shameless of helmet to helmet hits.

Locker only tallied 18 sacks last year, but many of those omitted non-sacks came from lumbering forward on scrambles. Locker suffered all around from lack of protection and time to throw: a sub-fifty percent completion rate, more INTS than TDs, and finally succumbing to injury late in the year against Oregon State.

Orson: No. This is Pluto, and on Pluto it's three yards and a cloud of purple dust one down at a time, another reason explaining why Fulmer chose a small-school guy rather than a known quantity.