For tonight's extremely important political campaign entitled "Oregon at Arizona," we bust out the Factor Six Six Factor Preview, where we weigh the six least important factors between the two teams to decide who will be the victor in tonight's lone chance to prove to the East Coast that Dennis Dixon does, in fact exist Pac-10 game.

This is science. Doubt it and die a fiery death when the evil hand of Werner Von Braun strikes you dead with its cold, logical fury.

Oregon's got Daffy Duck wearing a shade of green commonly found in only the most pustulent of infected wounds. Disney and dazzlingly unfashionable duds should have your inner Tim Gunn running into the arms of Wilbur and Wilma Wildcat, who being somewhat scruffy, wizened, and casually dressed in camo (as they are here) pretty much look like half the people who live in Arizona.

Consider, though, the fact that behind the smiling bill and jaunty duds, there lies a killer in the empty, giddy eyes of the Oregon Duck.

That's a mascot who'll ride or die with you, lawya.

Oregon. We've heard multiple times that of all the guys you would like to have a beer with in the ranks of coaching, it's Mike Bellotti.

We've heard this from numerous people whose opinions we trust on the matter. And his wife is crazy and attacks sportswriters in the booth, so you know you'll have something to talk about, at least: women, man. Women.

Whereas, if you had a beer with Mike Stoops, you're bound to begin with the same line, even if you prepare another one in advance.

You: So, um...you're Bob Stoops' brother, right?
Mike Stoops: (Hits you in the face with an ashtray.) Bartender! Shots! NOW!

Wildcats. By many, many furlongs. Ducks are forever bitching at you to feed them cheap white bread, leaving greasy shit all over lakeshores and park lawns, and refusing to let our Great Dane devour them whole without a chase. A wildcat, as a feral cat of some sort wandering the Great American southwest, at least serves a purpose by eating rats, something a duck would never do, as far as we know.

If you do possess video of a duck eating a rat, we want to see it, not only for the fact that this would be a the most badass duck this side of Darkwing Duck, but it would finally allow us to displace the "cow eats duck" video from our brain. Remember, don't keep the sad in--spread it via the magic of the internet.

John Mackovic coached at Arizona within the past five years. Until that odor of anti-charisma completely drifts away from the atmosphere over Tucson, Oregon wins this one running away. Plus, Rich Brooks thinks any pick but Oregon here would be bullshit--after all, they play on Rich Brooks field.

Oregon's a bit thin here. Fenuki Tupou? It's not even properly outlandish enough for a Polynesian name, what with it only having six vowels. What's a properly vowel-laden Polynesian name? Arizona's linebacker Apaiata Tuihalamaka, with eleven mighty vowels in his name, that's vowelfest from the islands for ya.

We choose the random factor of "your quarterback often looks as if he's about to devour the ball," which Oregon wins hands down. Dennis Dixon has the knack for being photographed with the ball held just under his mouth as if he were about it devour it much like Mark Mangino would.

(ZING! This is a cheap shot. Mangino would have his with tartar sauce and batter fried. Totally different thing there.)

So many of us hunger for victory...but only Dennis Dixon actually goes out there and tries to eat it, one touchdown at a time. 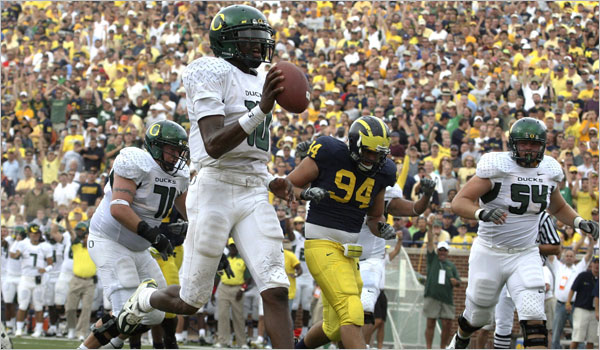 Summary: Oregon in a landslide. Got a spare kidney? Hope so, because we're wagering it on an Oregon victory here.