HOEPPNER OUT FOR 2007 SEASON

Share All sharing options for: HOEPPNER OUT FOR 2007 SEASON

The worst fears of Indiana football fans are confirmed: coach Terry Hoeppner will miss the entire 2007 season due to ongoing treatments for brain cancer. The statement from Judy Hoeppner, Terry's wife:

"For the past several months, Terry has received chemotherapy and radiation treatments. This battle requires us to focus our energy and attention on aiding his recovery in every way we can...These comments would be incomplete without Hep's ultimate statement to all of you - DON'T QUIT!"

Bill Lynch, former Ball State head coach and offensive assistant under Hoeppner, will head the Hoosiers program for the 2007 season. We wish Hoeppner the best, but the news makes the skin crawl for all the wrong reasons. We're unsure of the exact type of cancer Hoeppner has, but the numbers sound horrible: the general survival rate for a nervous system cancer in men age 60 (Hoeppner's age) is approximately thirteen percent. (HT: DevilGrad) 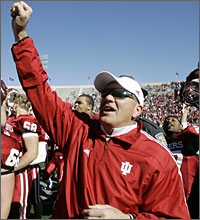