1. Mascot: Missouri. Sooner: so stressful. Either you're a land-hungry, whiskey-soaked, bloodthirsty maniac riding across the plains desperate to shoot an Indian over a few hundred acres of land, or you're an adjective meaning "hurry the hell up." Who needs that kind of pressure? Plus when we think of Oklahoma land-grabbing, we always think of Tom Cruise in Far and Away, riding his teeny toy pony out into the vast wilderness to build his own frontier home, complete with sod closet to hide in if he likes. Not the best association.

Missouri's overgrown Garfield, tame as he may seem, wins this battle. (Remember that among the "Tiger-mascot" schools, only LSU is actually insane enough to keep a live, potentially man-eating Bengal Tiger on campus. This alone says more about the school and state than you'll ever need to know.)

2. Head Coach: Oklahoma. We met Bob Stoops once, and got the chance to ask him a few questions, and frankly, we're still frightened. Even though he had his four year old daughter with him the whole time he was explaining his defense to the class, he still managed to intimidate without being cheap about it. He'd be in the middle of explaining the bump Cover 2, and his daughter would pipe up with "DADDY!!! WHEN ARE WE GOING?!?!?" Stoops, without missing a beat, said "Just a minute, Daddy's explaining something" in a voice fraught with nothing but the purest patience and affection. And just when you were about to fall into the trap of thinking Stoops was soft, he glared back over his shoulder at the class with an eyeful of cold rage: "Back--NOW WE LOCK DOWN THIS CORNER AND USE THE SIDELINE..."

Gary Pinkel, who's done a fine job this year, has never managed to come across as dedicated family man and borderline sadist in the same fifteen seconds to us.

3. Team Name: Sooner. Sounds great when boomed across the stadium in coordination with "BOOMER." Also not shared with at least three other D-1 football teams, two of which also play "Hold That Tiger." Originality trumps the images of drunk rednecks racing mules across the dirty plains here.

5. Best Roster Name: Oklahoma. C.J. Ah You. Who? Ah, You. Has the advantage of having a coherent and complete sentiment built into his last name.

The Factor Six Factor Six: Missouri. We're suckers for stadiums with open endzones, and Missouri's got the coolest one around: a wide-open swath of tenderly-manicured fescue straight from the fever dreams of starving cattle. Kids want to roll in it, sheep want to eat it, and we want to catch an extra point kicked into it. Add in the checkerboard endzones and the logo 'M' spelled out in white, and you're talking some underrated atmosphere points, here.

Factor Six Preview Result: Oklahoma. Science forces us to pick Oklahoma here, though we're sure fate will find a way of screwing the Sooner's again: hordes of locusts, a car accident that somehow breaks through the wall of the stadium and takes out half the Sooner bench a la Le Mans 1955, team-wide food poisoning from bad chicken wings the night before...something will happen to them, because this is 2006 and that is their fate. 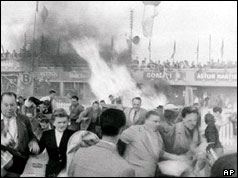