THIS POSTER WILL MAKE YOU FEEL THIS AGONY 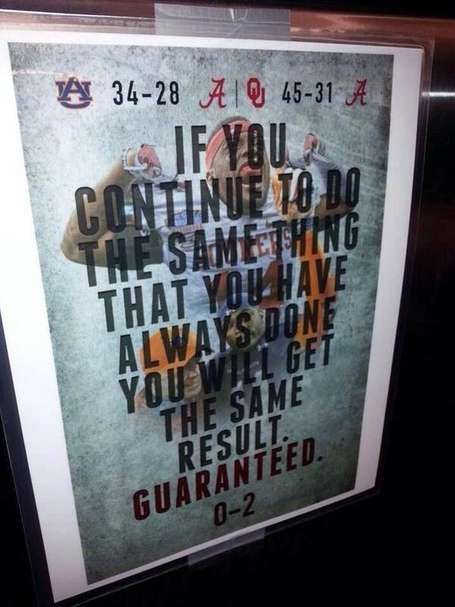 You don't know this isn't Nick Saban's Christmas card. It probably is, mailed in black envelopes to family and recruits sprayed with an aerosolized smell corresponding with sadness: the odor of musty, unwashed laundry, or a room gone sour when the air conditioning is turned off along with the electricity.

Who carries a can of something that sad and unappealing? The man who thinks of everything but how to face down tall receivers with tiny corners, Nick Saban, that's who. He probably also put some kind of terrible, anti-festive confetti in the envelope, too. Probably iron filings, or sort-of-live bees, or some such other irritant you'll have to spend an hour cleaning off your carpet or opening every window in your house to escape.

And why, why share this sadness with others? BECAUSE NICK SABAN IS SAD. He is sending you a Spotify list loaded with the saddest songs he knows. There is not a song made after 1984 on there, because that is when Nick Saban's entire mindbodysoul decided to focus on football, but if .38 Special doesn't hold up after all these years then hell, nothing is real anymore.

You will listen to it and be sad. You will be so goddamn sad over the loss of two football games to two very good football teams, because Nick Saban wants you to feel this pain. Embrace it with open arms, because ALABAMA LOST TWO GAMES AFTER WINNING THREE NATIONAL TITLES IN FOUR YEARS. YOU POOR, POOR BASTARDS SHOULD FEEL BAD ABOUT EVERYTHING.

In conclusion, high achievers like .38 Special, and hold on loosely to everything but victory.