THERE IS NO BOTTOM ONLY THE CONTINUING HORROR OF INFINITE DESCENT

Share All sharing options for: THE CRYTERION COLLECTION: TEXAS A&M/OKLAHOMA 2003

Dennis Franchione is currently being paid to coach football at Texas State University, where per their website he has "a history of rebuilding struggling programs." This is mostly true: Franchione began the rebuilding project at TCU that Gary Patterson perfected, and set Alabama on something like steady legs following the Mike Dubose. He was supposed to do the same at Texas A&M when he took the job there in 2003. Maybe we should talk about the time Texas A&M lost to Oklahoma by seventy-seven points and scored none in a game of American college football.

It's not like the 2003 Texas Aggies came into this game expecting anything but blunt force trauma. In fact, none of this should have unfolded like anything resembling a surprise. A&M was 4-5 going into the game, teetering on the verge of .500 and that golden standard of the Dennis Franchione era in College Station: a 7-5 record, and a bowl bid, and a quiet pardon for going 4-16 against ranked opponents during his tenure.*

Then the following happened:

Jason White completed his first fourteen passes, and threw five TDs in the first half. The Sooners' backs averaged over five yards a carry, meaning even if they had started to run the clock out in the second quarter that they still would have easily cruised to over 100 points as a matter of procedure, not malice. Oklahoma's offense averaged 7.7 yards a play, punted once, and was up 49-0 at the half.

Even putting the backup quarterback in made things worse. With Oklahoma burning like a metal-fluorine fire, all Texas A&M could do was throw a fire extinguisher into the blaze, run, and watch Paul Thompson singlehandedly outpace the entire Texas A&M offense by himself in the third quarter--ON ONLY NINE PLAYS.

Oklahoma stopped passing after going up 56-0 in the third and still managed to score another three TDs, including a fumble recovery returned for a score that would have been the precise moment we turned to a bystander, took advantage of the abundance of concealed carry permits held by Aggie fans, and begged them to ventilate the top of our skull with the sweet mercy of a discharged bullet. 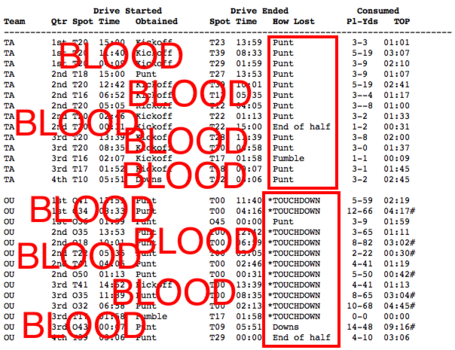 Yet this was more than a blowout. OU had eleven more total points than the Aggies had kick return yards. They never advanced past their own 40 yard line, and never held Oklahoma behind theirs once. Even with nothing to lose, Texas A&M never attempted a 4th down conversion. They never attempted a fake punt. Even with ample opportunity and zero cost in playing it loose, Reggie McNeal only attempted 13 passes, completed four, and had zero TDs and 32 yards total offense on the day, and had a whopping negative four yards offense in the second half. His last completion came in the second quarter. The rest: a sad series of disintegrating bricks thrown off the stiff iron hands of panicked, shoddily made robots called the TAMU receiving corps.*

*Oklahoma had 33 first downs. Texas A&M had three on the day, and was outgained 639 yards to 54 yards by the Sooners. This really doesn't capture how bad it was even at those numbers, or how impossibly long this fucking game was. Relative distortion set in: time crept so slowly you could have turned on a flashlight watching it in the dark, and watched the beam slowly roll out in spectrum across the room. Bob Stoops had players fall down on 4th and goal as an act of euthanasia, because the fourth quarter of this game was not football, but rather a hospice room for hope.

It was like the entire team developed a dramatic allergy to football, went into anaphylactic shock, and rather than reaching for an epipen or calling 911, just pulled out the flip phone and played Snake until the bitter end arrived. 77-0 wasn't even like A&M showed up and got blown out; it was like Texas A&M never happened that day, and submitted and committed to a voluntary self-abduction from the game of football.