At long last, we arrive at the end of our Mascot Edibility Rankings, and not without some controversy because when you get two English majors writing something involving 124 things, we're going to miscount and skip a number. We mean, GET THINGS TOTALLY RIGHT AND RANK TWO TEAMS AS PRECISELY AS GOOD AS THEY SHOULD BE.

19. Michigan Wolverine. RECIPE: Purchase a french bread pizza and leave it in your freezer for 76 years. Microwave it according to the directions on the box. Cover with shavings from a first edition Hemingway novel. Eat only during daylight hours.

18. Oregon State Beaver. No, for real, it's not only edible, but pretty good as long as you do it right:

Beaver meat is dark red with a strong flavor. Only young beavers, under the age of 2 should be cooked, as old beaver is said to taste like the underside of a Mexican saddle.

If you have tasted the underside of a Mexican saddle recently, please seek immediate medical attention. Also stop licking saddles of any origin or nationality whatsoever.

17. Boise State Bronco. Chris Petersen hung up the phone. A salary twice as high as Saban's, and full control over Longhorn Network programming...but no. The thirst was upon him, and the horsemeats of Boise were waiting.

16. Maryland Terrapin. Cracking the shell is difficult. The fitted hat and basketball jersey are inedible and can be removed with ease. For a small fee, the University will sell them to you themselves, because they need money.

15. California Golden Bear. Delicious ursine filet dipped in a chocolate fountain. This is where BEAST MODE comes from, and Marshawn Lynch is only using Skittles to throw you off the path to glory.

14. UCLA Bruins. Contrary to common belief, this Tibetan Mastiff is not a bear and never has been. He's also not Jewish, but in Hollywood who doesn't have a story to tell, really?

13. Marshall Thundering Herd. It turns out it's not cannibalism when you eat an ESPN radio personality, because he is marzipan. Super racist marzipan, but still.

12. Alabama Crimson Tide. The value hunter's pick: order one elephant steak in Alabama, and they will claim fourteen are on your plate.

11. Syracuse Orange. Fruit is good for you, sure. But this is upstate New York, so local custom requires that you accuse the orange of fucking your sister and then split it open with a crescent wrench. 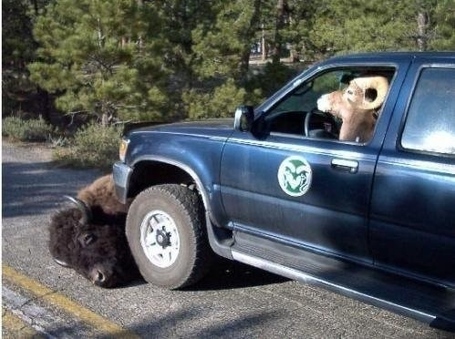 8. Arkansas Razorback. "I think we need to take a moment and thank this animal for giving its life for us. And Steve, our hunting guide, and his assistant John, just barely a man himself. And that shed full of orphans. And my brothers, sisters, and all who lost their lives in the hog's family's long night of backwoods country vengeance against me, everyone I love, and even total strangers who just happened to get in the way. Innocent, sweet strangers. Dear sweet Jesus why did I ever, ever kill this animal? What immortal, unbudgeable hubris wrought this tragedy, and when will the bodies indeed stop hitting the floor? Amen, and may God have mercy on all of our souls."

7. Akron Zip. Carefully, Terry Bowden made a notation in the kangaroo page of his Audubon guide. "Tender, and paired well with a construction hat full of rainbow sprinkles." Now it was time to find a school that would fund his Dodo a l'Orange project.

6a. USF Bull. Raised in a trailer by Jim Leavitt without sunshine for ten years. The steak so hard it can cut you with a fork!

6b. (tie). Buffalo Bull. Exactly like its Florida counterpart except it's actually Toni Kukoc found dead in a municipal building.

5. Florida Gator. The batter-fried variety is the best, particularly if it's been freshly sliced to ribbons by Chef Teddy Bridgewater. And it is.

4. Oregon Duck. Crispy and fatty in perfect harmony, it's more versatile than the traditionalists would have you believe. Please note that you can no longer purchase this dish with a check, credit card, or traceable paper currency.

3. Texas Longhorn. Would be at two, but for some reason Mack Brown used the filet for sausage, and the lips and assholes for steaks, and someone please get Mack Brown away from the grill.

2. Virginia Tech Hokie. Bud Foster only makes it one way, and one way only, son. 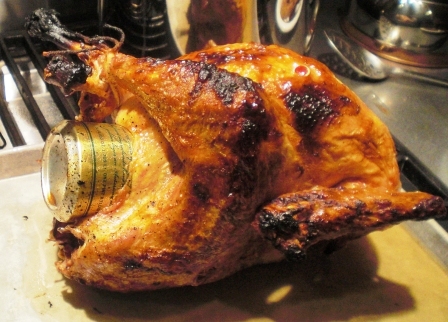 You also have to finish the recipe by watching Bud Foster finish all 23 other beers in the suitcase and watching him rip the shit out of some "Green Grass And High Tides" on Rock Band. Just like our forefathers did.

1. Colorado Buffalo. Lean, flavorful - the buffalo is truly one of Nature's most delicious animals. The Native Americans used every part of it, and so does Dan Hawkins, which is why Dan Hawkins is no longer allowed to sell things on Etsy.