ATTENTION: The image below is the TEAM POSTER. That makes it...just as bad. Carry on. --S.

Central Florida. A graphic designer on deadline stews in the night. The marijuana ran out hours ago. Cocaine, vacuumed up in a fit just after lunch, and now a barely remembered blip on the radar. A plastic handle of Popov Vodka sits half-consumed on the table; crushed Red Bull cans litter the room. There's bath salts, and he's heard you can smoke those in a pinch. The hallucinations were horrendous, but he was desperate.

He smokes the bath salts.

Three hours later and one terrifying spiritual journey later, a bioluminescent alligator stares and nods at him from the plaster of the ceiling. The Alligator speaks to him from a rippling portal in the popcorn ceiling, leaning on its edge like a  child looking out a schoolbus window.  An image on the screen floats in front of him.

You did well, bro. So very well. Now let's go steal copper piping from air conditioners I demand it as your new god and then let's stop by Checkers and order some sushi. They don't have sushi at Checkers. You will instead settle for a Baconzilla. This is the point of this spiritual exercise.

He nods at the glowing eyes. He agrees, because that is all there is left to do besides hit "Send" on the email with the attachment he has just wrought out of pixels, bath salts, and blind fear of the Alligator God's retribution. 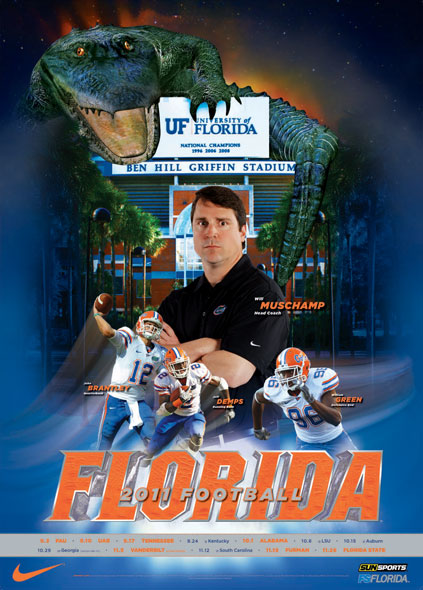 Will Muschamp's expression here is that of a C-grade martial arts protagonist who just heard the improbable name of the man who killed his sensei spoken: "SERGIO CHANG? WHO JUST SAID SERGIO CHANG?" It also looks like John Brantley and Demps are both carrying footballs on the same extremely confused play. This makes sense if you watched a single down of Florida's offense last year, where we could not have scored with two footballs and an extra blocker on the field.

The only one of them who can see the airbrush t-shirt demon sitting on the Swamp is the only smart person in the whole picture William Green, who is wisely fleeing the Mortal Kombat scenario unfolding behind him.  (HT: Mike)