THE BCS FINES THE FIESTA BOWL A GORILLION DOLLARS

Share All sharing options for: THE BCS FINES THE FIESTA BOWL A GORILLION DOLLARS

The BCS fined the Fiesta Bowl a million dollars for their transgressions against the integrity of the college bowl system. Please, off the floor. Don't laugh there: it's been a while since we've vacuumed. Go in that room over there, the one where we have the million dollars from the Fiesta spread out all over the place to roll in while you laugh. We're supposed to give it to "the youth of Arizona," so you'll probably want to tag along later when we roll up to a middle school and just dump it in front of the carpool and bus lanes.

The sum of one million dollars seems more randomly absurd than unjust, piddling, or anything else you can come up with to describe a punishment for the Fiesta's corruption. It might as well have been one billion, or one gorillion dollars. The sum isn't important. Its magnitude is meant to seem just impressive enough to be damaging, and to make it seem like the Fiesta has been chastened into behaving like a respectable member of a just system of honorable people working in an ethical business.

It is a sum meant to sound large, which is why they should have just made up a new number altogether and saved some cash. (A "fillion,' for example, a sum which is actually $383.98, would have done the trick, too.) 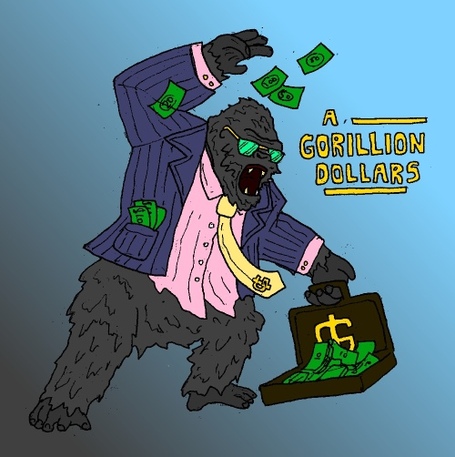 It's fiction within fiction within fiction, the Inception of punishments, and another metafictional fine in the history of athletic organizational fines. Charlie Kaufman is writing the screenplay, and when it's done your mind will be blown, the narrative will have been hopelessly wrecked into a thousand navel-gazey pieces, and as with most metafictions, nothing real will have changed at all.

PS. As TSK points out, giving away money in a charitable fashion is what the Fiesta's sort of supposed to do anyway, and not just by paying for lap dances.