THE CHARLIE WEIS OFFENSE (WHATEVER THAT IS): A BRIEF PRIMER

Share All sharing options for: THE CHARLIE WEIS OFFENSE (WHATEVER THAT IS): A BRIEF PRIMER

Hello, Florida fan. Charlie Weis is now in charge of your offense. You are about to receive some information about the Charlie Weis offense, but first, let's present a visual metaphor to put you in the right frame of mind regarding the dynamics of Weis as a playcaller. This is that visual metaphor. 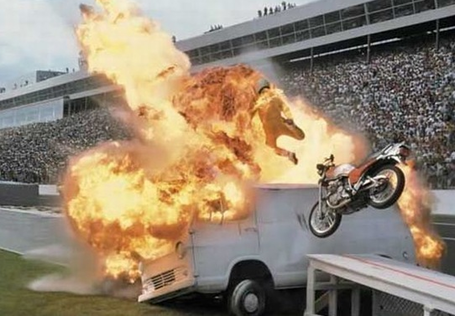 As New England Patriots fans, a still shell-shocked Notre Dame populace, and countless other neutral observers will tell you, a ride with Charlie Weis is indeed a long motorcycle jump over a flaming bus, often done blindfolded, half-blindfolded, or drunk off of some local hooch made from muscadine peels and filtered through old socks. Sometimes it's all three, and if you doubt that watch the 2007 Notre Dame/ Georgia Tech game for evidence.*

*In this game Weis attempted to install a spread option offense for one game on the road using a quarterback who had never started a game.

Weis is now in charge of the Florida offense, so we might as well review the case history before you spend the next year.

AN IMPORTANT CAVEAT TO REMEMBER AT ALL TIMES.

Charlie Weis is not Steve Addazio. Remember this, even when it grows dark and circumstances grow stupid.

THE BASIC PHILOSOPHIES OF THE CHARLIE WEIS OFFENSE

If you would like the playbook, thank the internet: the 2003 Patriots playbook is right here, available for your persusal 24/7. It is especially relevant because it is very close to what Notre Dame ran when Weis arrived at Notre Dame, right down to their huddle formation. You'll also notice the quarterback appears to be almost standing in the rectum of the center. This is an unusual formation known as "under center," unseen on a consistent basis at Florida in the 21st century. (Fedora ran some under center formations, but Weis' preference will be to work from under center.) 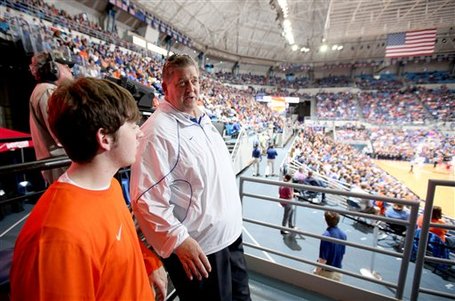 "I'm not impressed with this. I never am. It's important to not be impressed, Charlie."

Weis learned most of what he knows as Parcells acolyte in the Giants organization of the 1980s, teams running the Erhardt-Perkins system, a fairly flexible offensive system that in its first incarnations leaned heavily on the run game to pound out victories in cold weather. As time wore on, the system did play to its personnel and change to a more pass-friendly system when needed/possible, but that's where it started out: a system that got its big plays off play-action and ran the ball to win games.

Weis' own wrinkles to the system have varied from stop to stop. In New England his offenses sometimes passed more than they ran, and sometimes ran more than they passed. At Notre Dame the first two years of offensive success were marked by a diversification of formations and offense that trailed off dramatically as the Jimmy Clausen era wore on, with the final year of Weis' tenure working primarily out of the same three wide set. This could have been because of personnel issues and a lack of depth at tight end, or because the offensive line couldn't protect Clausen, or because Charlie was phoning it in and praying for a swift death, or because Charlie Weis just does this shit sometimes.

Whatever the insanely speculative reason might be, the offense got simpler as time wore on at Notre Dame, passed more than it ran, and when it did run was not very successful. Weis then followed up his firing with a tenure at Kansas City where the Chiefs led the league in rushing in 2010. The pattern is that there is no pattern, run/pass-wise, and that he seems genuinely happy to adjust to the tools he has on hand. If there is something to look forward to besides his non-Addazio personhood, it is this.

Passing wise, the nostrums that this system "runs to set up the pass" isn't exactly true under Weis. He likes "jerk routes," plays designed to make you look like a jerk attempting to cover them. When he was with the Patriots he liked calling screens, draws, and swing passes on early downs to keep defenses off balance, and was fond of calling slant routes to dictate coverages and keep the blitz at bay. He likes sending receivers over the middle if he can trust them regardless of size, i.e. Troy Brown for the Pats running In-cuts against much larger DBs and LBs in his NFL offenses. The deep ball was a special feature of his Notre Dame offenses, but with Floyd and Tate and Clausen's ability to throw the nine route it only made sense. Double move routes, an unheard of tactic under Addazio, will be common.

As for the run game, it's pretty basic and detailed brilliantly here by BGS.

All in all, the same plays run out of multiple formations with a simple numeric play-calling system.

Weis excels at making productive, efficient quarterbacks, and has done so wherever he's been. Matt Cassel at KC cleaned up to a 28/7 TD/INT qb on a playoff team in 2010 under Weis' tutelage. Tom Brady's football parentage has been disputed, and while he is in large part self-invented he's charitably thanked Weis for his tutelage. Brady Quinn and Jimmy Clausen, kickable as they both are as professional prospects, were both tidy and effective college quarterbacks. This is something he does well.

He is also aggressive, sometimes mindlessly so, but under brilliant things let's include the times when aggression works to your advantage. Yay aggression. 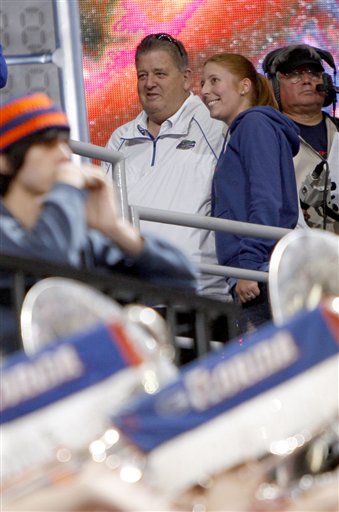 What the blue hell is going on in this picture? CHARLIE IS TRIPPING SO HARD Y'ALL

THE NOT-BRILLIANT THINGS OH THE FINE THE STUPID THINGS

Insanely aggressive to the point of mismanaging the clock in several instances late in games in his tenure at Notre Dame. (See 2008 Michigan/ND.)  Had no success mounting a successful run attack at the college level, though there's a number of reasons why that might have been, most worryingly an inability to develop an offensive line capable of pushing around sunlight and happy thoughts, much less an SEC defensive line and linebackers. Sometimes attempts the borderline insane in playcalling, and we don't mean the Mike Leach variety where it's just naked aggression, but rather "elaborately constructed aggression."

When things go well for Charlie Weis in adventurous play-calling, they look like the well-executed backdoor checkmate concocted from the ether. When he grabs the FAILbrake, though he grabs it hard and pulls until the train derails. It's a failure by being too clever, which is different than watching, say, a Houston Nutt offense fail by banging its head against the wall until it knocks itself unconscious.