FULMER CUPDATE: AUBURN GOES ALL IN (THE FRONT DOOR WITH A GUN)

Share All sharing options for: FULMER CUPDATE: AUBURN GOES ALL IN (THE FRONT DOOR WITH A GUN)

Brian put this together quickly  because Auburn just scored as many points as he and Reggie Nelson have inches of dong yardage. That number is not a typo. It is eighty, as in "8-0." 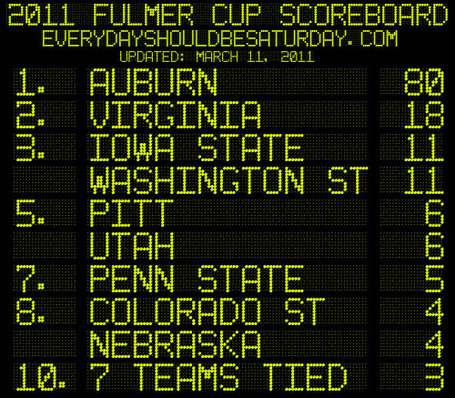 AUBURN JUST ENDED THE 2011 FULMER CUP. Four Auburn football players have been charged with five counts each of first degree robbery, one count each of first degree burglary, and one count each of theft of property in a home invasion that took place early Friday morning in Auburn. The bond for each of them is $511,000. Antonio Goodwin, Kowalski Q. Kitchens, Michael McNeil, and Harrison Mosley are all in legal straits that are, per Glennon Threatt on Finebaum just a few minutes ago, the worst in the legal system shy of actually killing someone.

The minimum sentences in theory for these is somewhere between twenty years and life. Put in the bluntest and most accurate terms possible, the four men involved are in horrendous fucking trouble if this all stands. They've been kicked off the team, but that's the least of their concerns right now.

The numbers for the single biggest combined team score in the history of the Fulmer Cup follow. (Rules here.)

Each robbery count is a felony, and is three points per charge. Reading the police report, each player received five counts of first degree robbery, bringing three points times five charges each for four players to sixty points. Add in the felony burglary charges (one each) for four people at three points, and we're up to 72 points. Four misdemeanor theft of property charges pile on to 76 points total, and that's before we add a single, measly bonus point on top just for the dark humor of throwing only a single bonus point onto a massive heap of Fulmer Cup points. Just look at that widdle bonus point. Eees soooo kewte.

Auburn previously had three points, so the sum total for Auburn in the 2011 Fulmer Cup comes out as 80 points. This marks the second time this week UVA has blown a seemingly insurmountable lead, and sets a record for the Fulmer Cup in terms of team scoring for a single year, much less a single incident. This is the Krakatoa of Fulmer Cup scores; we hope to never see its equal, because we think that involves an entire football team being charged with murder.*

**Something that Auburn could have been charged with following the 2010 SEC Championship Game.***

***No they couldn't have. There wasn't enough left of South Carolina to identify.