Fresh air, sunshine, the melodious whistle of a bird - these are natural treasures we all need to enjoy from time to time.  This is no less true for college football coaches, who often spend hours studying tape away from life's more pastoral settings.  Last weekend, those coaches without a game to play took the time to get back to nature; let's check in with them in this edition of

FLORIDA INTERNATIONAL HC MARIO CRISTOBAL: Everybody out of the van - this looks like the spot!  Let's unload all the gear, but try to keep it orderly, guys.  The key to a successful camping trip is teamwork and good planning.

SYRACUSE HC DOUG MARRONE: Wait, did you say CAMPING trip?  That...geeze, this is embarrassing.  That's not what I thought this was.

CRISTOBAL: Well what the hell did you think we were driving into the middle of a national forest for, Doug? 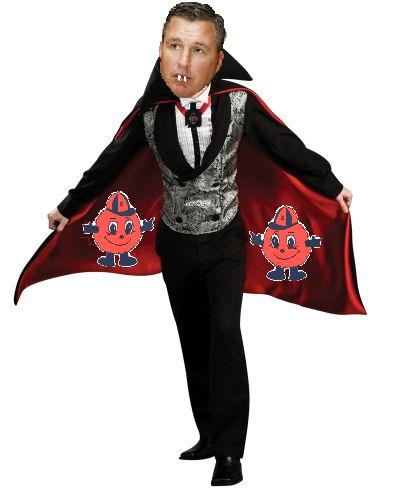 CRISTOBAL: Vam - ok, everyone else knows we're here to CAMP, yes?  Raise your hand if you are somehow unclear about what's going on this weekend.

[Six other hands go up.]

CRISTOBAL: Lord.  Fine, what did you idiots think the plan was?

NC STATE HC TOM O'BRIEN: Stampin' trip.  Got all my best stamps here, gonna just look at 'em, think about our wondrous postal system.  Helluva thing, stamps.  Put one on a picture postcard, you can send the thing darn near anywhere.  Norfolk, Scottsdale, Overland Park.  Even Provo, or so a traveling salesman once told me.

CRISTOBAL: Those are all 32 cent Love Swan stamps from 1997.

O'BRIEN: Man finds a stamp he likes, he sticks to it.  Never understood the fuss about all these modern Tweety Bird and Space Shuttle and Louis Armstrong stamps.  Don't like em, don't want em.  Love Swan'll do just fine for this man.

CRISTOBAL: Wonderful.  The rest of you? 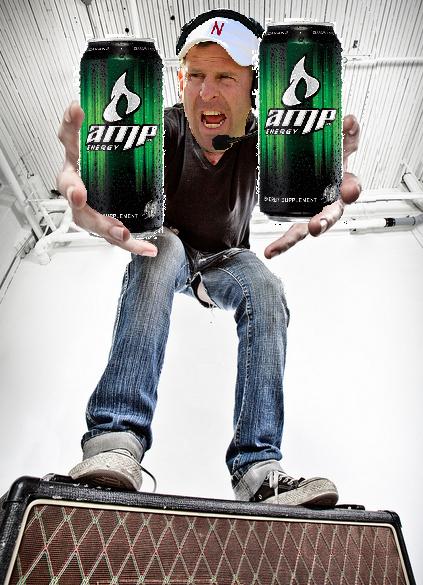 HOUSTON HC KEVIN SUMLIN: Rampin' trip.  Already got it set up and everything.  Y'all have fun, though.  Oh, and I apologize if you pass out from oxygen deprivation after I CATCH ALL OF THIS AAAAAAAAAAAAAAIR 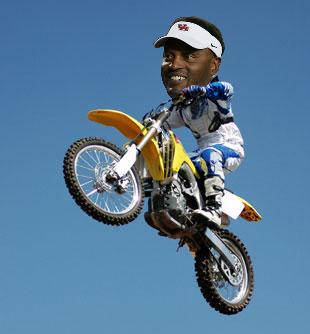 [He disappears into the clouds, seemingly unimpeded by gravity.]

CRISTOBAL: ...He better not think that gets him out of his share of gas money.  So - NOW are we all clear on this camping trip concept?

BOSTON COLLEGE HC FRANK SPAZIANI:  Actually, no.  Not entirely, at least.  I understood this was a camp thing all along.  I just sort of took it from a different angle than you all did. 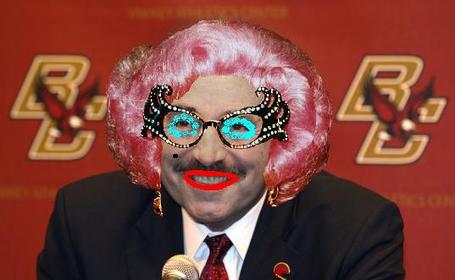 CRISTOBAL: Well, did you bring a change of cloth-

CRISTOBAL: (through clenched teeth) Despite the fact that some of us thought we were going to spend our bye weekend going "lamping" or "cramping" - and, for the record, I have NO IDEA what those even mean - I managed to rent enough tents and sleeping bags for all of us.  So we.  Will.  Make.  This.  WORK.

ARMY HC RICH ELLERSON: Sorry, Mario, I must not have been paying attention - I thought you said this was a tamping trip.  See, I brought pipes for everyone and plenty of tobacc-

CRISTOBAL: JUST SHUT THE FUCK UP AND PITCH THE TENTS.

(About an hour later, Coach Cristobal surveys the campsite.)

CRISTOBAL: Looks like you're having a little trouble there, Rick.

UCLA HC RICK NEUHEISEL: Well, yeah, it's not gone exactly as planned.  But I think we're about ready to turn this thing around.  Just got a good feeling about it!

CRISTOBAL: What happened to those two? (He gestures to Larry Fedora and AKRON HC ROB IANELLO.)

FEDORA: I tore my ACL.

NEUHEISEL: It's that dang injury bug again.  Time for us to dig deep and find a way to camp all the same!  So, whaddya say, MC?  Ready to help Ricky Malibu get this tent into championship territory?

NEUHEISEL: I CAN'T BE THE ONLY ONE WHO CARES ABOUT THIS CAMPING TEAM, DANGIT.

CRISTOBAL: Joker, looks like you guys are pretty much set here.  Did you all bring the food like I asked?

KENTUCKY HC JOKER PHILLIPS: Sure did!  When the team found out I was heading out on this trip, they offered to whip some grub up for me to take along.  Those are really some great kids.  Morgan Newton even sent me with these Smores.

CRISTOBAL: Those appear to be clumps of mud and sandwiched between two Triscuits.  I'm not even sure what that white stuff that's supposed to be marshmallow is.

PHILLIPS: It's - yeah, it's caulk.  Fucking Morgan.  Now I don't even want to look at the potato salad my secondary gave me.  Fortunately, my wife baked some delicious blueberry pies we can all share.  Say, where'd those go anyways?  Kelly!  You seen the pies? 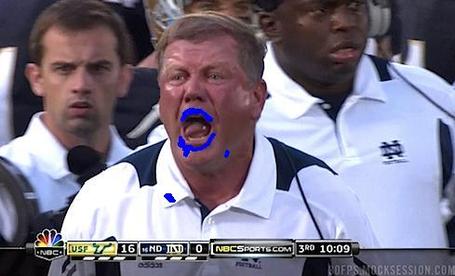 CRISTOBAL: Brian, your face is covered in blueberries.

KELLY: Nope, sure isn't.  That's just how my face gets when I'm angry.  Still thinking about the Michigan loss, I guess.

PHILLIPS: Your teeth are purple, too.

O'BRIEN: Still got my food, though.  Wanted to just get unsalted Saltines like usual.  Wife told me, no, gotta jazz it up a little, social event and all.  Smart woman, she is.  Spendthrift, but smart.  Took her advice, got ten boxes of Kix for everyone.  Only cereal I saw with a mother's approval.  Not my mother's, of course.  Only things she approved of were single pleated trousers, clean bedsheets, and the book of Deuteronomy.

CRISTOBAL: Dammit, Gary, I got enough to worry about without you pissing and moaning like a middle schooler.  What's the problem?

PATTERSON: Well, as you know, I agreed to share tents with the Big East fellas.  They told me it was gonna be awesome - they were bringing Game Gears, and Fruit Roll-Ups, and what was described to me as "a king's ransom of Nerf shit, some of which cannot be sold in the U.S."  And it sucks.  Marrone is just farting up a storm and Spaziani only brought a Super Soaker with a cracked tank and no trigger.  Don't even get me started on Holgorsen.  Christ, here he comes.

WEST VIRGINIA HC DANA HOLGORSEN: Hey, FATTERSON!  Are you fucking TATTLING?  You got something to say, say it to my face like a man!

CRISTOBAL: Dana, please PLEASE put your clothes back on.

HOLGORSEN: YOU BETTER RUN!  Look, I thought were camping, bro!  Clothes are for that world of business jerks and fuck-face lawyers.  When you camp, you get free.  You show nature you don't respect it enough to keep your junk hidden.

CRISTOBAL: Dana, if you don't put your clothes on, I'm not giving you the key to the cooler full of Red Bull.

HOLGORSEN: FINE!  You all are worse than my daughter's Daisy troop.

(A few hours later, the Buddies are tucked away in their sleeping bags ready for their first night of sleep in the great outdoors.)

CRISTOBAL: Man, I am WIPED.  I don't know how, but it looks like we might pull this thing off after all.

ARKANSAS HC BOBBY PETRINO: Yeah, this coaching thing can be crazy, right?  Makes you wonder if there's something else out there you should be doing instead.  Maybe go work for the Post Office - that doesn't seem so bad, getting paid to walk around in shorts.  Of course, they're not doing so hot, so you probably only do that for a year, then, hmm, maybe high school English teacher?  But the cool kind, you know, all "Fuck King Lear, we're gonna read the Men In Black novelization!"  After that, you could go sell carpets by the side of the road for a while.  Big ones, too, with white tigers and shit on 'em.  Forty bucks a piece, just live in the van - got it made!  Save up a little dough that way, and then just ride the rails until you find the sweet release of death...

CRISTOBAL: Bobby, you're scaring the kid.

(A loud crash is heard outside the tent.)

CRISTOBAL: Dammit, it's probably a raccoon rootin through all those stale Kix.  I'll go chase him off.

(He turns the flashlight towards the trash pile, revealing a filthy figure.) 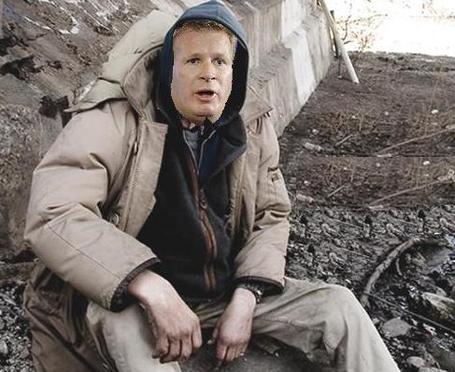 CRISTOBAL: Mike?  Coach Stoops, is that you?  Jesus, you nearly scared me to death.  Look, um, I guess you can stay the night if you want, being that it's Arizona's bye week, too, but...well, this is sort of a "coaches only" thing.  I'm sorry, man.

FORMER ARIZONA HC MIKE STOOPS: Oh, right, the Buddies trip and all that...yeah, I actually totally forgot about that.  I just - I sort of live here now.

STOOPS: I already ate all of those Smores.  They're gonna hurt to poop, I think.

CRISTOBAL: Well, they sure won't NOT hurt to poop, old buddy.