Share All sharing options for: THE AUBURN/FLORIDA GAME BINGO CARD 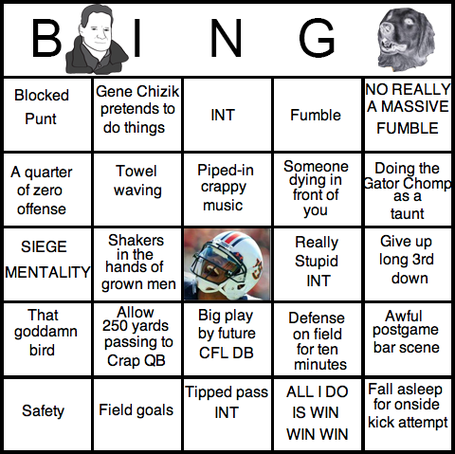 BLOCKED PUNT. Goddamn you Auburn. Go back in the annals of Auburn football, and you will find that prior to 2010 and the CamNewtonacolypse, the most storied game in the history of Auburn football centered on not one, but two punt blocks. To hell with Beamerball: blocked punts are the St. Anthony's medals of Auburn football, their Tussin, their ikons they nail to walls while praying for the death of Nick Saban. We saw a special on Nature about dogs the other night where old Mexican women bred hairless Xoloitzcuintli just so they could take the puppies and apply them to aching joints as an arthritis cure. If they could farm them, this is exactly what Auburn fans would do with blocked punts. (Then they would strap bombs to them and blow them up at the Auburn Institute of Exploding Dog Studies, and call it science.)

GENE CHIZIK PRETENDS TO DO THINGS. At least Tuberville didn't pretend like he did anything. He just wore some khakis, called timeouts, and once a year yelled at referees. The rest of the time he did some tasteful pacing back and forth, just like an Auburn coach should do. Even Pat Dye didn't have anything but Conway Twitty playing through his headset, and sat as a glorious, empty headpiece with a nice twangy accent just like God intended SEC coaches to be.

INT. Or maybe, like, five of them if you want the full Terry Dean Merit Badge.

FUMBLE. Kestahn Moore, step on down.

NO REALLY, A MASSIVE FUMBLE. The second one in the game, and lost into the arms of an Auburn defender.

A QUARTER OF ZERO OFFENSE. This just appears in the playbook for one quarter. The QB raises his armband, and there's just "LOREM IPSUM" and a picture of a cat where once there were plays. Rather than adjusting, the offensive coordinator "wings it," and then "NO REALLY A MASSIVE FUMBLE" or "INT" results. In really special years, we get two quarters of zero offense!

TOWEL WAVING. When we saw Trooper Taylor on an airport shuttle in DC, why yes: he did have a duffel bag with him. It said "Trooper" on the side of it, and we figured Trooper must be the kind of guy who has his name monogrammed on a lot of things: his towels, shirts, bags, his morning toast DAMMIT LOUISE WHO PUT THIS THREAD IN MY TOAST OH COOL IT SAYS TROOPER!

Anyway, we're sure the duffel bag he had with him was full of not money--because Auburn does not pay in cash, but rather with pure heaping tablespoons of the Auburn spirit--but of towels. Like Ichiro with his bats, he strokes, them, talks to them, and tests them for the right heft and aerodynamic stability. You think Trooper waves just any towel to hypnotize a hesitant recruit's mother, or to signal his displeasure over being kicked out of a little league game? You think just any towel makes it to the courtroom for important waving during insane lawsuit filings?

it's just like recruiting, man. Not just any towel will do, and you need to thin the herd just before you find the right ones.

PIPED-IN CRAPPY MUSIC. We don't have the traditionalist's opposition to piped-in music, but Jordan-Hare is commandeered by a strip club DJ sometime in the second half of every game. That "Closer" is not played when the opposing team is backed into their own endzone is stunning to us.

SOMEONE DYING IN FRONT OF YOU. Auburn is the only place where we've seen people dying before games, as in literally falling out and grabbing their chests in front of the ramps on two separate occasions. We have no idea what this means, but remember thinking how lucky the first guy was after the 2006 fiasco as long as he didn't watch it in the hospital.

DOING THE GATOR CHOMP AS A TAUNT. Very novel, and never, ever gets old. You don't even have a signature gesture for us to return the favor, you dullard shitbreeches.

SIEGE MENTALITY. Remember, in order to have a "siege mentality," you have to have "something worth taking."

SHAKERS IN THE HANDS OF GROWN MEN. It's the Southern Man's Jersey-Wearing, and is just as distasteful. Put that shit down. At least Georgia fans use the excuse of "I use the handle to stir my drink," which while false is still an admirable save attempt.

REALLY STUPID INT.  "The Chris Leak," if you will, though Tebow, Grossman, or Dean were just as capable in this department.

GIVE UP REALLY LONG 3RD DOWN. The pros do it with an uncovered QB scramble, preferably from someone who previously could not hobble two yards without being hammered by a defensive end. AKA, "The Brandon Cox Special."

THAT GODDAMN BIRD. If you want to worship a heartless feathered sky-weasel, go right ahead. It's not a bald eagle, so we are under no obligation to salute. Just keep it away from us, because those things have claws and diseases and shit. (You're just encouraging the next plague, Auburn fans.)

If we had the money, we would commission a Russian geneticist to create a fluorescent Orange and Blue Pterodactly to swoop in, annihilate the bird mid-flight at pregame, and then perch on the lights watching to see how many people were really and truly all-in for the game. When our cultivation of Mikhail Prokhorov is complete and he becomes a Florida booster, this will become reality. We'll show you what "Raptor Center" really means. 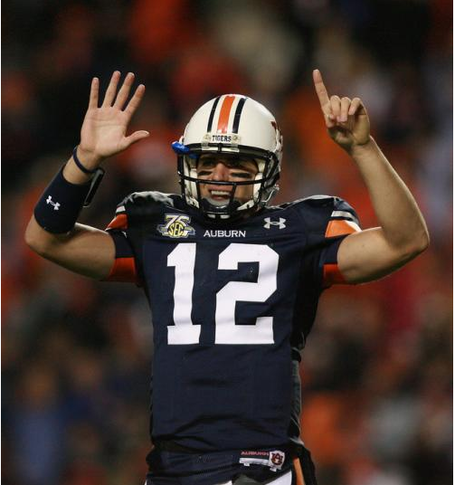 They're talking about me! MEEEEEE!

BIG PLAY BY FUTURE CFL DB. Considering we are Florida, it's probably coming off the hands of a future CFL QB, so it's really only appropriate.

DEFENSE ON FIELD FOR TEN MINUTES. Mmm, taste the lingering hints of Tuberville on the palate!

AWFUL POSTGAME BAR SCENE. Don't defend this. Don't try. Getting a beer postgame in Auburn sucks, and will always suck, and Athens has the last word on this and everyone else is just trying to catch up.

SAFETY. Remember Arthur Miller's saying that suicide actually kills two people? That's what a safety does, except the person in both cases is you watching the play. You die twice watching a safety. The National Board of Football Medicine has determined that giving up a safety actually takes 25 minutes off your life. We made that stat up, but when it happens for us against Auburn it is totally and utterly true, and may in fact be a conservative estimate.

FIELD GOALS.  Should be made illegal, or at least must be made without the benefit of a holder.

TIPPED PASS INT. It's like an INT, but tinged with the sweet aftertaste of accidental bullshit.

ALL I DO IS WIN WIN WIN. T-Pain has already turned on y'all, btw.

FALL ASLEEP FOR ONSIDE KICK ATTEMPT.  Given that Florida allowed an Aussie Punter to score on a fake last week, this seems to be a certainty because it is classic, and because our special teams are being coached by tiny brain-damaged mice this year.