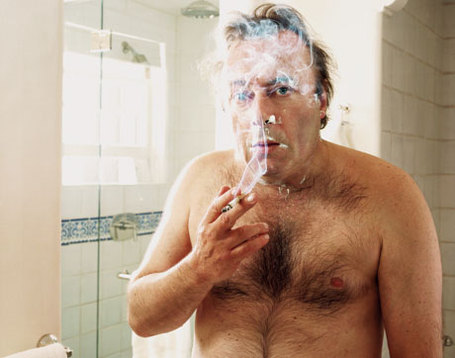 Eschew the politics: he may not even know what they are, and therefore neither do you. Forget his almost evangelical atheism, since it's only relevant here in noting that he's sticking to his guns even while starting down the barrel of a very nasty cancer and possible death, and buying the ticket and taking the ride to the end is definitively Digital Viking no matter the creed.

What you should know about Hitchens is that when he dies, he will have inhaled more cigarettes than the combined workforce of eight Chinese asbestos factories. He will have consumed enough alcohol to kill a nation of gypsies. (A large one, not one of your Monacos or Equatorial Guineas.) He has covered juntas, wars, riots, and all matter of international conflagrations (and not at a distance, either.) He has been assaulted in the streets of Lebanon, consumed grappa with closeted gay military officers working as toadies to Saddam Hussein. He has been spanked by Margaret Thatcher and called "a naughty boy" by the Iron Lady herself.  He has had himself waterboarded in the name of journalism, and has nearly killed every intern The Atlantic and The Nation ever had with his celebratory end-of-internship luncheons. He said "If you gave Falwell an enema, he could be buried in a matchbook." He was once called ""drink-sodden ex-Trotskyist popinjay" by George Galloway. His response: "Only some of which is true"

He has also written some of the best drinking advice ever in his memoir, Hitch-22:

Hitch: making rules about drinking can be the sign of an alcoholic,' as Martin Amis once teasingly said to me. (Adorno would have savored that, as well.) Of course, watching the clock for the start-time is probably a bad sign, but here are some simple pieces of advice for the young. Don't drink on an empty stomach: the main point of the refreshment is the enhancement of food. Don't drink if you have the blues: it's a junk cure. Drink when you are in a good mood. Cheap booze is a false economy. It's not true that you shouldn't drink alone: these can be the happiest glasses you ever drain. Hangovers are another bad sign, and you should not expect to be believed if you take refuge in saying you can't properly remember last night. (If you really don't remember, that's an even worse sign.) Avoid all narcotics: these make you more boring rather than less and are not designed—as are the grape and the grain—to enliven company. Be careful about up-grading too far to single malt Scotch: when you are voyaging in rough countries it won't be easily available. Never even think about driving a car if you have taken a drop. It's much worse to see a woman drunk than a man: I don't know quite why this is true but it just is. Don't ever be responsible for it.

Cheers, sir, for if there are disagreements in the particulars the style is undoubtedly affirmed by all gentlepersons of refined but lusty taste. To the Viking.

Holly: Milk punch! The search function says we haven't done milk punch yet, and we don't know how. Milk punch is dead handy for late winter because it's like egg nog without all the pesky eggs and with a jacked-up alcohol component. You can concoct it with practically any combination of bourbon, milk, vanilla, and sugar, but don't use any kind of milk but whole (cut it with cream, if you're fancy like that), and don't be lazy about the sugar: It has to be superfine; confectioners' sugar is a borderline acceptable substitute. For full a more detailed recipe, we're partial to the one found in one of our favorite cocktail books. 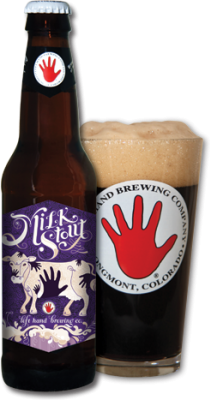 Like eating a chocolate malted milk ball, but you know, not just any chocolate malted milk ball. This one was named Henry, and he only remembers the streets of Dublin, and then the sisters who took care of him at the orphanage. They were the ones who recognized his talents, though, his charm, his charisma, his ability to solve other problems the duller boys couldn't! Gifts arrived for him without explanation; clothing found its way onto his back. A secret patron named Minnemore funded his every step behind the scenes, and then--miracle of miracles--the Irish scamp became an Oxford man, like Wilde, but not gay and with good teeth, slicing his way through the upper crust like a shiny Celtic bread knife whose shimmer few could resist. Then Henry got quite wealthy in the colonies, and spent his days reading Omar Khayyam in the original Persian on a country manor outside Dublin he purchased with a pittance of the fortune he'd made in the spice trade. Oh, how life's wheel of fate turned for Henry!

(Summary: the flavors are ridiculously complex and balanced and improbable, and we could drink this every day for every meal without thought or regret. A classic beer is a really cliched term, but this is a classic beer. It should wear an ascot and you should address it as "sir" when drinking, if you care about proper manners, asshole.)

Orson: Domino's Thin Crust Pizza. Judge us all you like, but the grand thing about Domino's thin-crust is its absolute destructibility. It is the rental car of foods. You're not buying it to own. You're not going to respect it. You're not going to hem and haw and say, "I dunno, this is our local fancy artisanal pizza joint, so is anyone going to look askance at me for not ordering the yak ham on the side?"

This is not that food. You will mouth-fuck this pizza to death in no less than ten minutes, and you will only feel moderately bad about it. Name another mainstream American food-like substance you can say this about, and we will award you one Dave Brandon signed pizza box (now with free Brady Hoke mask!)  (Wear it while having sex! That won't be disturbing at all!)

Holly: Minnercheese! Can we get snotty about something so lowbrow? Can we insist it be homemade? We do, because that stuff at Publix will do in a brown-likker tailgate pinch but is too orange for our palates (AND WE LOVE ORANGE THINGS OF ALL KINDS). Did you know there's a Pimento Cheese Awareness Month? Does there need to be an awareness campaign to alert the public to Pimento Cheese Awareness Month?

To wit: Pimento cheese. Make it yourself. It is so easy. Bros, you can buy a mini Cuisinart food processor for like $40 at those home stores your lady hauls you to on Saturday mornings in the offseason. Put it on crackers. Put it on raw veggies. Put it on toast points. Use the word "toast points" at fancy parties. Trust EDSBS.

Holly: It is our birthday, so forgive us a moment of celebratory explosivity:

The music. The uploader's screen name, "SheepWrestlers." The tagline, "I USED A FIREWORK AS A CANDLE FOR MY CAKE!" We love everything about this. Are we eating our birthday cupcakes in the car this afternoon on the way out of town? Yes. Will we be trying this from the driver's seat? MAYBE.

Orson:  Combat Motorcross. The sport of the dystopian Polish future we will all inhabit someday. 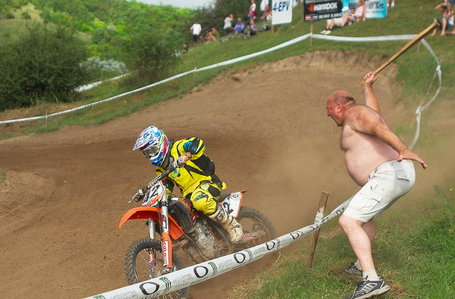 Holly: THE GLORIOUS AMERICAN RIVERBOAT. We would live out our entire lives in the plot of Richard Donner's horribawesome screen adaptation of Maverick if we had half a chance. (Starring Rick Neuheisel as Jodie Foster.) Dolla Bill Doug asked us what we wanted to do for our birthday. We said, "Play cards on a riverboat." Doug reminded us that it was January. We said, "But I want to play cards on a riverboat." Doug found one, and then found a casino shaped like a riverboat where we might take shelter from the unseasonably cruel Southern winters, the sort of accomplishment which illustrates why we continue to date a Georgia bro against the express wishes of our upbringing: 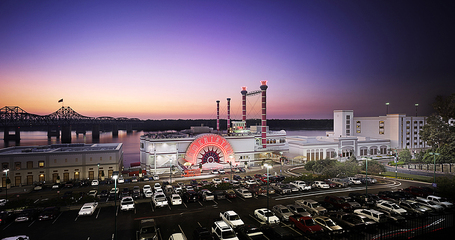 Any bros in Vicksburg this weekend, holla atcha bloggers. We'll be the ones scaling the neon paddlewheel with a whiskey bottle clamped in our teeth.

Holly: The Lost Skeleton of Cadavra.


It's camp for self-referential camp's sake before that got to be all played out, and we love it to distraction. In college we wrote to Larry Blamire and asked him if he'd mind us staging a musical adaptation, and he allowed it, sight unseen. Somewhere on the internet floats a lost video of us singing our heart out in a dress swiped from the Bye Bye Birdie costume rack while clinging to a full-size human skeleton. Its sequel, The Lost Skeleton Returns Again, is shot in that lush mid-century travelogue style (that's another movie we could just dive into and never come out) that delightfully offsets the constant barrage of imminent danger from shoddily costumed monsters. FILMED IN SKELETORAMA.

Orson:  BRONSON. The movie chocked with prison violence you can sell to your wife by saying, "But Tom Hardy is jacked as fuck and naked through the whole thing!"

If you don't love this movie we exile you from our personal nation, especially if the pairing of the Taylor Brothers' "The Electrician" with a naked Bronson taking on six prison guards at once doesn't stir something in your soul.