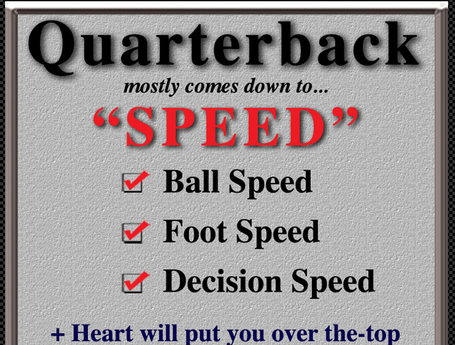 That's a slice of the pure HTML glory on QBFORCE (ZING) (FIREWORK GIF) (ZANG), the site run by Mike Forcier, the father of Tate, who like both of his brothers has decided to transfer after an unsatisfactory tenure at quarterback. If you're wondering how the same stupid thing can happen three straight times, well, just look at this and all questions are instantly answered. (Helicopter father is helicoptery.)

I SHOULD BE FINE TO SIGNING DAY. SHOULD.  Stephon Tuitt, who two days ago switched to Georgia Tech from Notre Dame after Paul Johnson showed him his ballin' face tat, has now switched back to Notre Dame after an in-home visit from Brian Kelly. Johnson on the switch: "Dammit, getting this damn thing removed is gonna hurt like a million bee enema. Not that you care, or that I care if you do." (Then he punches something in the taint and grumbles. Something, as in it could be a large animal or a car. Cars have taints. We promise.)

no one at UGA seems particularly broken up about it.

DON'T MAKE US LIKE YOU ANY MORE MISSISSIPPI STATE. They have a reasonable, non-inbred bulldog, their stadium has the second-best fescue in the SEC (Arkansas is still number one, and could be eaten as a neat side salad without too much dressing,) they have Dan Mullen, and in addition to all that they decide to allow a little paid nudity to slide. Do NOT make us love you, Starkville. (Godfrey interviewed her, and--surprise!--she's not married to staying at Mississippi State.)

EIGHT GRAND WE'RE SOLD. We know someone might buy this, but we remind you that like all Craigslist exchanges casual sex of at least fifteen minutes in length is not only expected, but is mandatory. (HT: Charlie.)

AWWW LOOK AT THE FIRENZE-PERM ON THAT. Dan Marino's hair at Pitt was pretty much an REO Speedwagon concert you wore on your head.

THE GROPENWOLF IS LOOKING RIGHT AT YOU. Zach Mettenberger may be a werewolf, so yeah, why not go to Louisiana State University, the beardiest fanbase in the SEC, where you can walk under the light of a full moon biting people without too much fuss.