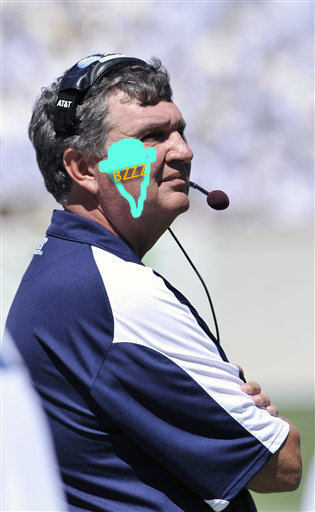 Paul Johnson and Georgia Tech just stole a five star recruit from Notre Dame, and you just read that and yes you are not sleeping and dreaming a really weird dream where Paul Johnson has a Gucci Mane ice cream tattoo on his face in order to recruit the "insane urban youth demographic." But if he did have that tattoo, it really would help in recruiting, because nothing says "I'm truly serious about the future in every single way" than a tattoo of an ice cream cone with a lightning bolt coming out of the top of it. (Or at least makes you more willing to nod at the crazy man with the lightning bolt ice cream cone on his face. JUST DON'T HURT ME SIR PLZ.)

This may be the only thing that could make Paul Johnson appear to give less of a shit about anything you think or say short of walking around constantly on fire, something he's got Tech grads working on right now. It's not like he needed help in poaching Tuitt, either, since Al Groh was already there, and when you've got Groh-mentum on your side neither God nor Godzilla can stop you. One time Al Groh asked for extra tomatoes on his burger and Wendy's, and you know what? They didn't hear him, and he had to ask again, this time while still saying please, and they sort of put tomatoes on there, but not really like he wanted to, and then he just took the burger and ate it. Then Al just kind of walked away, because grumble mumble mehhh he's Al Groh that's why.

(Today's the exception, because seriously, "Five star defensive end recruit goes to Georgia Tech" is way, wayyy out of the perpetual key of "Meh" that Groh lives in on a daily basis.)