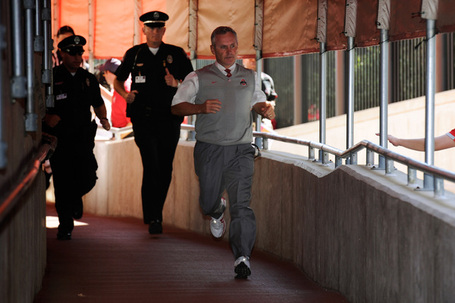 Ten years ago today, Ohio State brought in the coach from Youngstown State, presumably to a chorus of boos from those who wanted the Buckeyes to hire Jon Gruden (Gruden: the default candidate of choice for a decade running at this point.) Since that fateful day, Tressel has won a BCS title, seven Big Ten titles, 106 games overall, and even beat one SEC team that one time. He has also collected an impressive collection of heads on his wall from coaches he has outlived in the Big Ten, including Glen Mason, Tim Brewster, Bill Lynch, Cam Cameron, Lloyd Carr, Rich Rodriguez, Ron Turner, John L. Smith, Bobby Williams, and two coaches he literally outlived, Randy Walker and Terry Hoeppner. (Joe Paterno smiles at your quaint body count, Jim Tressel, and waits until you have buried four generations to compare yourself favorably to the legend.)

Also, the birth rate in Columbus has gone up since he was hired, especially among Latinas. (The Vest likes his boricuas and his morenas.)

AND LOOK WHAT HE MADE YOUR FOR YOUR BIRTHDAY. It's impressive, but this ode to Ohio Stadium means walking across the floor at this man's house must be a sheer hell of pure sharp foot pain.

SPEAKING OF THE DEAD RISING. Steve Kragthorpe is allegedly a leading candidate to replace Gary Crowton at offensive coordinator at LSU. Crowton, who somehow failed himself into a raise and a three year contract at Maryland under Randy "Offense And Esperanto And I Don't Speak Either" Edsall, leaves a very easily filled gap of an underachieving offense good for two, possibly three non-horrible game plans a year, which Kragthorpe should be able to equal since his offenses at Louisville were mediocre when they were good and truly crapulent when bad. Les Miles might hate scoring touchdowns, something Michigan Men fear Brady Hoke might have too much affection for since Hoke doesn't have "a non-scoring offense" to install when things really get rolling offensively.

The other major candidate is TCU's Justin Fuente, who likes to score and be good and stuff. For this reason it is safe to think he won't get the job.

ADAM ROBINSON IS SO SORRY. The Iowa RB apologizes for his sins, and asks to make penance for his crimes. Why any running back would voluntarily ask to be put back on the Hawkeyes is a mystery due to the cursed nature of the position in Iowa City; only Shonn Greene managed to avoid it, and even then it required him spelling his name oddly so evil spirits could not find him in the student directory. Concluded: return as Adaimm Robbinnsonne, and 1,000 yard seasons without injury await. Come back with normal name, lose legs in strange iPad explosion.

CALL US A NURSERY CAUSE BABIES BE ALL OVER THE JOINT. Florida hires another infant coach, former 49ers D-lineman Bryant Young, to coach in the BoomSquad. Young has one year of coaching at San Jose State and a year internship under Weis at Notre Dame to his name, but NFL NAME WOW. (This is a theme.) (And it's less impressive for those of us who firmly believe in NFLAIDS.)(Do you detect apprehension at some of our coaching hires? Yes? YOU SHOULD.)

BRADY HOKE LIKES STUPID VEGETABLES.  If Brady Hoke's mother disrespects brussel sprouts one more time, it's throwdown time, lady. Have you ever had them cooked with garlic and bacon? Have you ever slid down a water slide that was actually a long corridor of flawless breasts with high-price cognac flowing over them? If so, where is this? Because, having just made this up, we'd really like to see this.

YAY SHIFTY STRATEGY-NESS. Really, they could have hired Kragthorpe and Texas fans would have been thrilled with Anybody But Davis, but Bryan Harsin is you know, actually good and stuff.