We all know that college football is no longer just a sport; these days, it's a business. So how best to spend your hard-earned dollar? Here at EDSBS, our research division has partnered with Consumers Union to rigorously test every aspect of college football, from the teams themselves right down to the mascots. And with CU's help we're boiling those test results down into easy-to-understand rankings that will leave no doubt as to which products represent the best value for your dollar -- and your rooting interests. And yes, for you Auburn fans who are intimidated by big wordsy paragraphs, we've got the little filled-in circles, too. So without further ado, here's our first set of ratings: coaches in their first year at their current school. 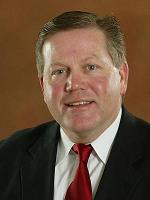 BRIAN KELLY, NOTRE DAME | ●●●●o
Highs: High resale value, offensive expertise, quiet operation.
Lows: Price tag, lacks a puree setting, some durability issues.
So far, so good: The most heralded hiring of the 2009 offseason acquitted himself well in his first outing, leading the Fighting Irish to a 23-12 win over Purdue. Kelly gets the job done with seamless, unobtrusive convenience; not only is he far more compact than Notre Dame's previous offering in this category, he gets the job done with far less noise. Perhaps our biggest caveat concerns reliability -- ND's recent history includes a long list of products that impress at first but end up needing major repairs, or complete replacement, in a far shorter amount of time than their competitors. Ordinarily we advise against purchasing extended warranties, but that might not be the worst idea here. 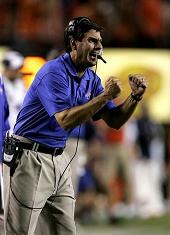 Highs: Excellent bloodline, imperturbable coif, has many years of service ahead of him.Lows: Recent redesign means we don't have much reliability data; noisy.After a flashy 2009 offering that only lasted one year on the market before undergoing an embarrassing recall, Tennessee has gone back to basics, which may be exactly what the doctor ordered. Dooley impressed in our initial testing, and while said testing was not exactly rigorous -- Tennessee-Martin is not only a I-AA program but a mediocre I-AA program -- he did get from 0 to 50 points far quicker than any of us predicted. (Be honest: If somebody had told you before the game that the Vols were going to score 50 points, your first question would've been how many games it took them to get there.) Granted, the Vols are still going to get vivisected by Oregon next week, a humiliation that Dooley's predecessor would probably stave off by accusing Chip Kelly of being a child rapist in an interview with the Knoxvillle News-Sentinel, then taking advantage of the resulting controversy and distraction to lose to the Ducks by only 4. But UT doesn't need that kind of flash right now; what they need is stability, and we can think of no better coach to provide that than a guy with a famous last name who sounds like he was sired by Scarlett O'Hara and Foghorn Leghorn.

RUFFIN McNEILL, EAST CAROLINA | ●●●ooHighs: Forceful sideline presence, variety of attachments, excellent at training aspiring young boxers.Lows: Substantial energy consumption, high sweat emissions, defense doesn't actually look that great.East Carolina has a history of making more with (relatively) less, and McNeill looks poised to continue that tradition. No denying he's a bit of a sentimental favorite here -- after getting spurned for one head-coaching job by a band of mindless Craig James marionettes at Texas Tech, he returned to his alma mater to find one of the barest cupboards in Division I-A. For that reason, we'll give him a temporary pass for coughing up 49 points to Tulsa; it was a thrilling game, at least, and for perfecting the "get the 6'8" freshman tight end to run into the end zone and outjump everybody" Hail Mary play, he deserves to go down in college football history as one of the sport's great offensive innovators. Major caveats involve styling (McNeill won't impress any of your dinner guests with a sleek, Euro-designed silhouette) and safety -- his substantial sweat emissions may present an electrical hazard, so protect those outlets and take extra care when deciding how to orient him in your kitchen. 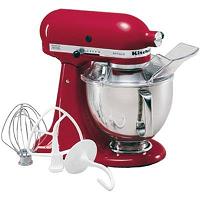 KITCHENAID KSM150PSER ARTISAN® SERIES MIXER | ●●●ooHighs: Top scores for reliability, excellent heavy-duty setting, exudes quiet confidence.Lows: Very limited experience, heavy, routine repairs can be a hassle.If it's an American icon you want in your kitchen -- or on your sideline -- you can't go wrong with KitchenAid's venerable line of stand mixers, which set the bar for design excellence in the fifties and continue to impress today despite a minimum of major changes over the product's life span. As far as coaching ability goes, the Artisan® series is admittedly light on experience; calling "dough hook with speed setting 5" on third-and-13 last week against Richmond was not one of its finer moments. But there's just something about the KSM150PSER's hard-working, dignified presence on the sideline that a box score can't adequately account for. If what you want is not flashy trick formations but rather consistent, disciplined play -- and uniform food grinding that makes every dish look like it was prepared by a professional -- the KitchenAid is a fine choice.

BUTCH JONES, CINCINNATI | ●●oooHighs: No-nonsense buzz cut, wide selection of speed settings, competitive pricing.Lows: Performance decreases markedly in hot, dry climates; warranty coverage is lacking.Cincinnati did quite well for themselves by taking a Central Michigan product and slapping their name on it last time, as evidenced by the guy who's now coaching in South Bend, and if anything Butch Jones had an even better record with the Chippewas than Brian Kelly did. So to see Jones crap out so early in our testing, getting shut out after rolling up a 14-0 first-quarter lead and losing by two touchdowns at Fresno State, was more than a little jarring. Jones' team was bound to experience a bit of a dropoff from last year's 12-1 Sugar Bowl run, but it's hard to figure how they could only manage 25 net rushing yards, or how they could rack up 118 total yards in the first quarter but less than that for the entire remainder of the game. Obviously it's too early to call Jones the second coming of Kragthorpe, and you gotta like, or at least fear, a guy who looks that much like Macaulay Culkin's mean older brother from "Home Alone." But Buzz . . . your offense . . . woof. 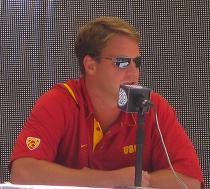 LANE KIFFIN, SOUTHERN CALIFORNIA | ●½ooo
Highs: Amazing QB guru, excellent juicing function, hot wife.Lows: Completely unsuitable for defensive purposes, dismal tech support.Admittedly, we approached USC's 2010 offering with skepticism, having been warned beforehand that it was a trendy design wrapped around subpar engineering and a minimum of features. But even we were surprised at how poorly Kiffin performed in our battery of defensive tests. Here's a brief list of teams that have held Hawaii to fewer than 36 points in the post-June Jones era: Cincinnati, Navy, Louisiana Tech (twice), San Jose State (ditto), UNLV, Central Arkansas. On the other hand, Washington State did give up 38 to the Warriors last season, so congratulations, USC -- you probably don't have the worst defense in the Pac-10. We were so surprised by Kiffin's low performance that we called the company's technical support number to see if we were operating it incorrectly, and were welcomed by a sullen operator who couldn't have been more than 19 years old and who gave us no help other than insisting "That's how it's supposed to work -- it's all part of the plan." It's starting to look like the 2010 USC is the modern-day analogue of the '70s-era Jaguar XJ6: a beautiful, expensive machine that will look great in your driveway, and probably never leave it. 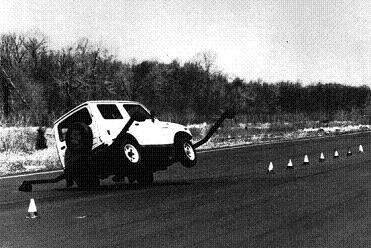