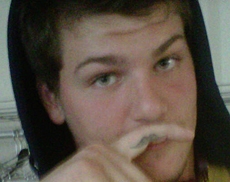 Lewan sounds like one of the legends of our time:

I mean it's the best icebreaker in the world. You go up to them," Lewan said, putting his finger in place to reveal the mustache, "'Miss, let's be serious, I just want to dance.'"

(HT: Brian.) Some of us forget our childhood dreams, but Lewan didn't, taking his boyhood dream of having a mustache tattooed on his finger and making it happen. For that the honor is your, Taylor. Let's be serious: your mustache is made not of hair, but of ink, pure imagination, and the stuff that composes dreams. Salute, sir, and HAPPY MUSTACHE WEDNESDAY, MOTHERFUCKERS!